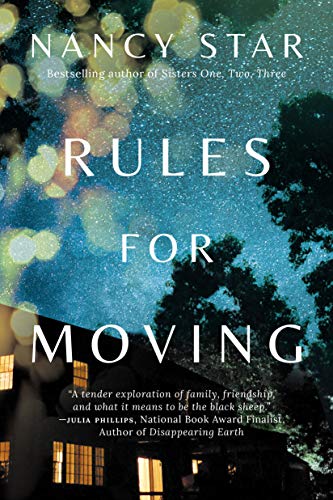 Lane Meckler is a columnist known as “Ask Roxie” in which she gives advice to help people online with problems. Living in a tiny one-bedroom apartment in New York City with her husband Aaron and young son, Henry, she likes her job and adores Henry, but her marriage is crumbling. She knows they’re bound for divorce, but Aaron keeps putting it off until it's the right time to tell Henry. Lane wonders if there ever will be the right time.

One night when Henry is at a friend’s, Aaron leaves for a business dinner. He is inebriated and angry with Lane. Happy to be alone and not having to face a bunch of Aaron’s colleagues, Lane is settled in when she gets a knock on her door. It is the police stating Aaron has been in a fatal car crash, and she needs to identify his body. Also, in the accident with Aaron was with his "drinking buddy, Brielle, whom Lane believes is his mistress.

Now, in a fog, Lane doesn't know whether to laugh or cry. Aaron's passing solves her divorce dilemma, but how can she tell her son his beloved father is gone? Six-year-old Henry worships his dad and though Aaron and Lane have marital problems, Aaron has been a great father.

Henry is devastated and suddenly refuses to talk to anyone but Lane. During the funeral and afterward as friends and neighbors bring food and condolences, Henry remains silent, and Lane wants to be left alone with him.

Unsure of how to help Henry, she brings him to a therapist. She is terribly bothered she can deal with the problems of others, but not with Henry. The suggestion she gets is to let Henry take the lead with questions, stating he'll come around when he's ready to talk. But this isn't happening.

Lane chooses to leave the city and rent a house in New Jersey. Before they move, she and Henry fly to Florida to see her parents though they are estranged. Though they haven't seen each other in years, Lane hopes a visit be good for Henry.

Her parents and their home are the same. They are still set in their ways, so Lane thinks this trip is a mistake. Her father is still cranky and argumentative and her mother says next to nothing except for not saying much, but only, "Oh well . . ."

The visit turns disastrous when Henry is involved with a traumatizing event, so they leave early before planned. They return home and to their new rental, and Henry becomes more withdrawn. Then when Henry is being teased in school, Lane continues his lessons at home for three weeks until the summer break.

Henry, a highly intelligent young child loves to  draw, a project at which he is adept at for someone his age. His therapist considers he is taking out his grief with his illustrations. He is reluctant to make friends, and Lane agonizes if he'll ever return to the happy, outgoing child he once was.

In parts of this novel, Henry offers his views, naming the time before his father's death, "Before What Happened." Now with things being different, he terms the present as the "New Normal." He observes Lane is changed too and worries she will die and leave him alone. Able to read his mother's expressions, he can tell her emotions, but he is fearful of asking questions and upsetting her, instead keeping his thoughts locked inside.

Their rental, which is old becomes riddled with problems, and Nathan, Lane's landlord, is sympathetic. Due to the house needing a lot of work which will take weeks, Nathan offers Lane and Henry his guest cottage on Martha's Vineyard for the summer. Seeing how unnerved he is, along with the fact he's become attached to Henry, Lane agrees to his offer. But before they leave Sylvie, Lane's mom shows up unannounced for an indeterminate visit. She refuses to say why she left FL and Lane's dad, so Lane accepts her presence and hopes maybe she can learn some family confidences from her.

When Sylvie offers to pack, Lane agrees, remembering all the times they moved when she was young. Sylvie, known for her dyed-in-the-wool "rules" for living and moving would harass Lane if she thought she did not pack to her standards. And because she talks so much, Henry learns her rules that make Lane anguished, not wanting to put him through the ordeals she and her sister Shelley faced as kids.

Invited to a gathering at a neighbor's home before departing, the children are relegated to the basement under the charge of Eric, the older son of the hostess. Eric tells the kids they are not allowed to go upstairs, or they'd have to pay a "toll." His reason—his mom promises to pay him $100 to keep everyone quiet and busy. Henry, not wanting to be away from his mom is upset, as  he later explains:

“According to Henry, the problem in the basement was that he didn't have a hundred dollars.

“‘They have to pay a toe,’ he explained.

“‘A toe. Like the kind you pay when you go over a bridge or in a tunnel.’

“He nodded. ‘Eric said if anyone wanted to use the stairs before it was time to leave, they had to pay him a hundred dollars. But I didn't have any dollars. So, I had to wait for you to know I wanted to leave. But you didn't.’

“‘I’m sorry,’ She laid a hand on Henry's head and gently twirled on of his curls around her finger. ‘But you left anyway. You didn't listen to Eric. That was brave.’

“‘I listened until he went to the bathroom and then I stopped listening. I tried to make my feet tread lightly on the stairs, like in Grandma Sylvie's Rule Number Four. But it didn't work. They have a squeaky step. Probably so no one leaves without paying a toe.’

“‘You know what, buddy? What Eric told you about the toll—he made that up. He said that because his mom promised to give him a hundred dollars if no one went upstairs. I'm really proud that you left anyway. If you feel uncomfortable somewhere, you leave.’

“‘Like when we felt uncomfortable in the apartment, and we left? Rule Number Three?’

“Move Forward and Never Look Back. It was unnerving, Henry knowing so many of her mother's rules.”

Here is a mom still struggling over her husband's death and now dealing with Henry's dilemma. It’s difficult to imagine how anyone would react. Is Lane being too lenient with him, or should she be more demanding with getting him to express himself? She not only has to face this problem, but now they are shuttled around from residence to residence, as she was as a youngster and also has to deal with her reticent mother and an absentee sister who offers no help.

Lane proves to be a strong and independent woman with most aspects of her life except with Henry and her family. She holds a dark fear and secret she believes has made her an outcast to her parents and sister. This is the only family Henry has, so she desires to break through the acrimony and become close-knit.

While on Martha's Vineyard, things change and Henry somewhat comes out of his shell, though he still only speaks to Lane. She and Nathan, become close friends, and before long share details of their past. But, when Lane's dad arrives and another traumatic incident occurs, the whole family becomes transformed.

This is a difficult, but a heart-warming tale. Lane juggles her priorities, insisting on discussing her history and admitting to things she's been holding inside for years. In the process, she will find herself and more ways to cope with her past.