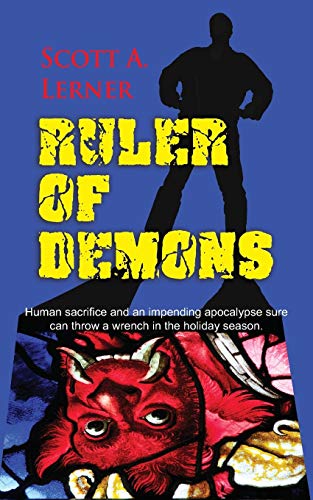 “It’s the only novel about demons, mutilation, and the apocalypse that might potentially leave a smile on the reader’s face.”

With hell’s minions about to summon the apocalypse, resolving the danger is not a job for superheroes, priests, or even a clever professor. Small town attorney Samuel Roberts is the man on the case—albeit reluctantly.

Ruler of Demons, the sequel to Cocaine Zombies, continues the tongue-in-cheek humor mixed with paranormal mystery formula that Scott A. Lerner seamlessly employs. While there are some gruesome murders and bone-chilling demons, he keeps the tone light and humorous. Samuel can’t help but crack jokes even when facing almost certain death. When he’s threatened by a man who has flaming eyes, Samuel said his look would make David Copperfield jealous.

The protagonist has an entertaining rapport with his friend Bob Sizemore as they hop from Chicago to Jerusalem to Paris seeking to stop an apocalyptic cult from raising the devil.

While walking through the Old City section of Jerusalem, Bob says he feels they’re being watched, to which Samuel responds: “I am sure we’re being watched. Every salesman in town knows a sucker when they see one.”

A big law firm with close ties to the Catholic Church calls Samuel for help after three nuns were murdered in a gruesome ritual. According to an eerie parchment obtained by the church—words supposedly written by Satan—a fourth sacrifice must be made in nine days. The victim must be a knight with no flag or colors. Samuel is skeptical that this would create hell on earth, as the church fears, but he’s nevertheless persuaded to jump into the fray after someone sends a severed tongue to his house as a warning.

Samuel is more concerned about stopping the fourth murder than saving the world but as he and Bob discover, supernatural forces are at work here. When a guy who burns flesh with the palm of his hand says to stay out of his way, it might be a good idea to listen.

The only questionable device was the repeated use of dream sequences to warn Samuel of danger. It establishes more of an accomplishment when a character figures out something important on his own as opposed to having the answer gifted to him. Samuel still shows great survival instincts when things turn ugly. He’s confident enough in his abilities to walk straight into a trap expecting to turn the tables.

There are exciting twists in the fast-placed plot that raise the stakes for our heroes. Ruler of Demons doesn’t feel like a horror story, but there’s strong tension and entertaining banter throughout the book. It’s the only novel about demons, mutilation, and the apocalypse that might potentially leave a smile on the reader’s face.