To Rule the Waves: How Control of the World's Oceans Shapes the Fate of the Superpowers 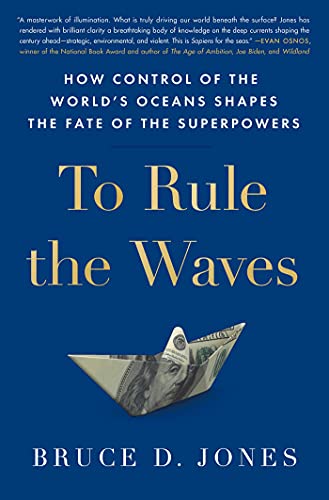 “an excellent primer on the role of seaborne commerce in creating our global economy . . .”

This book is hard to classify; however, by combining history, geography, business case studies, and strategic analysis, Bruce Jones has written an excellent primer on the role of seaborne commerce in creating our global economy and the challenge of keeping the oceans a “global commons” open to the free transit of goods.

The 21st century is likely to continue to be an era of global competition for resources and geographic dominance, but not on land. The interconnectedness of the international economy and its reliance on ocean-going commerce, particularly for a fast-rising China, will challenge the current global order as China seeks to establish a worldwide presence both economically and militarily to ensure its access to natural resources and export markets. Combined with the potential effects of climate change on the patterns of world fisheries, the need for oceanic energy production, and the potential for a new Arctic shipping route dreamed of by mariners for centuries will likely make the world’s oceans the dominant scene of diplomatic and potentially military action in the next 25 years.

The author begins with a comprehensive historical examination of the relationship between global trade, sea power, and the rise of maritime hegemons like Great Britain and the United States. Jones then takes the reader around the globe to explain why freedom of the seas and secure global shipping is so important to sustaining not only the American economy but the entire international order.

If you’ve ever wondered why goods are so available worldwide, the story of shipping containers and global shipping companies is fascinating, not only as a tale of economic innovation and modernizing how goods are moved, but an epic transformation of the seemingly mundane topic of loading and unloading ships. More importantly, as the center of the global economy has shifted from trans-Atlantic trade between the US and Europe to trans-Pacific trade between China and the world, a new competition for maritime power has emerged to potentially upset the global balance of power and trade.

In particular, the author spends a great deal of time discussing the expansion of China’s navy from a coastal defense force to a true blue-water navy able to operate around the globe and challenge the primacy of the US Navy, probably the most important strategic shift in the global balance of power since the end of World War II. As China becomes more assertive and expands its presence through a serious of basing agreements in the Middle East and Africa, there can be no doubt about its intention to become the world’s premier naval and shipping power, able to aggressively defend China’s interests and territorial ambitions, even potentially at the expense of other Asian countries, particularly Taiwan and Japan. The virtual annexation of large swaths of the South China Sea by China’s land reclamation projects and build-up of military forces in the Spratly and Paracel Island groups has alarmed all of southeast Asia, while at the same time challenging traditional  notions of free passage and safe transit traditionally protected by the US Navy.

The Arctic is likely to be another future area of maritime contention as Russia continues a military buildup along the Siberian coastline and in the waters approaching the Arctic and polar icecap. The potential of a sea route from the Pacific to the Atlantic via this northern route could significantly bolster maritime trade by eliminating the long route around the Indian Ocean up either the Suez Canal or around Africa

The final topic explored is the growing naval arms race, driven by competition for deep-sea resources and the potential effects of climate change. This is particularly true of the Arctic region, where changes in the extent of the polar ice expansion could open up a long-sought commercial shipping northern route from Asia to Europe, bypassing the need for a long transit through the Indian Ocean and around Africa or through the Suez Canal.

As the global economy becomes more dependent on the oceans, the potential for either naval cooperation or naval competition will likely become the major security issue for the next quarter century. Understanding the economic and political impacts of the complex mix of nationalism, environmental impacts, and economic pressures is crucial for recognizing the actions of major players such as China and the United States in this global commons.