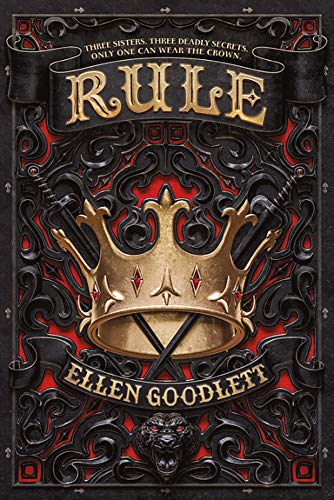 “Rule masterfully navigates a series of difficult storytelling forms and tropes to emerge as a cohesive, compelling, and fast-paced fantasy adventure.”

Three girls—a lady’s maid, a traveler, and a scholar—are thrust into a deadly political game. Sired as bastard children of the king and raised in isolation, the girls must now compete against one another for the right to the throne. Each has a dark secret, however, and someone at the palace is determined to blackmail the girls into giving up their claim before the king dies and the country falls apart.

The first of a duology, Rule is satisfying political fantasy with just a hint of magic. The voices of Zofi, Akeylah, and Ren are sufficiently distinct and compelling, making Rule one of the few successful YA fantasy books with multiple first person POVs. It is easy to distinguish the girls from one another when their chapters shift, even without reading the chapter header. This is no doubt due to the care the author took to establish their backgrounds and personalities early, before the story thrusts into action.

Each of the girls comes with substantial backstory that remains relevant throughout the book. The secrets each holds, from Akeylah’s foray into the Vulgar Arts to Zofi’s murder of the prince, are bright, vital motivations that keep the book pacing strong even when politics threatens to drag it down.

Rule presents sporadic deep worldbuilding—enough to keep the reader interested but not enough to sacrifice much pacing. The book gives a clear setup for the sequel, yet is fulfilling on its own in terms of countries, rivalries, and the set up of the kingdom.

That the sisters do not spend much time actually fighting each other but first explore, then come together, breaks Rule away from an otherwise somewhat stale battle royale trope. Their camaraderie brings warmth to the narrative and drives a deeper empathy with each of the abandoned princesses. Akeylah, Zofi, and Ren are stronger together, as the reader knows from the beginning. Mercifully this is discovered sooner, rather than later, by the girls as well, and the pacing speeds up as soon as the girls join forces.

The romance line for each princess is also strikingly, almost surprisingly, well done. There are no happily ever afters just yet, but the reader is treated to complex emotional turmoil surrounding each affair. Zofi gets the classic love-with-the-enemy in her slow-burn romance with a Talon soldier. The soldier—Vidal—shows impossible earnestness in the sort of way that makes him impossible not to fall for as well. Ren’s troubled history with Danton drives the rebel intrigue side of the story, while Akeylah’s romance with the queen brings in the political intrigue.

A particular discussion should be made in regards to the power dynamics of Akeylah and Rozalind’s romance. Goodlett successfully navigates a popular f/f romance trope (power differential) without falling into any of the traps that make this kind of pairing so problematic in heteronormative fiction. While Rozalind is Akelah’s stepmother and the queen, both she and Akeylah are the same age. They have also never met before Akeylah arriving at the palace, removing any possibility for a parental-child bond. The clever final touch comes from their similar stations, marking them both as outcasts despite their royalty:

“Anyone who looks, shall we say, not strictly Kolonyan.”

The blending of these three elements removes the actual power differentials, leaving the difference in name only. This preserves the flavor of the forbidden without any character harm

The magic, though sparse, shines when it is allowed to. Rule presents a more subtle magic system than many other books in the genre, but even within blood-based magic systems, great care is taken to make “tithing” stand out. The tithe of invisibility is particularly well described in the following scene:

The strangest moment came when she passed in front of the spectators and had to meld her skin, so her opponent would see Countess Yasmin standing over King Andros through Zofi’s body.

Overall, Rule masterfully navigates a series of difficult storytelling forms and tropes to emerge as a cohesive, compelling, and fast-paced fantasy adventure. With enticing magic, powerful secrets, and well thought out romance, Rule is a welcome addition to the YA fantasy genre.