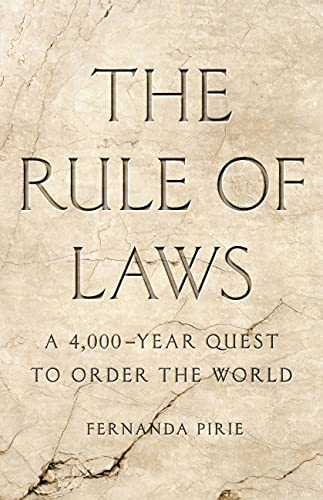 “This is a fascinating and easy to read survey history that avoids legal jargon and deftly combines history, anthropology, and legal analysis to provide an excellent introduction to why laws were made, how they evolved, and what they mean to human society.”

What are laws and why do they exist? Throughout human history, bands of people have attempted to set out rules for societal conduct, dispute resolution, and the limitations of the arbitrary power of rulers. In this new volume Fernanda Pirie, a professor of legal anthropology, offers a layperson’s journey through the evolution of laws from the beginning of civilization, exploring the interaction of laws and religion, the evolution of law and government, and the development of law as a tool of diplomacy.

The author begins with an examination of the beginnings of civilization and the first recording of laws that could be widely disseminated and applied to growing urban civilizations. Kings and rulers used laws to impose both discipline and order over their growing realms, and even to help impose religious enlightenment among their populations. More importantly, by writing down laws, which were at the beginning mostly rules of conduct for handling disputes, sometime involving property, others for more serious issues of bodily injury or death, these rulers tried to instill in their subjects a sense of justice that would ensure their loyalty and support.

By examining the global development of jurisprudence and how it evolved from an imperial edict to something debated by aristocrats to the legislative systems of common citizens, the author shows how diverse civilizations handled the desire for justice and the limitation of arbitrary power, particularly the imposition of life and death. As Pirie also notes, the evolution of legal systems was often intrinsically tried up with religious beliefs, particularly among the ancient Hebrews and the Islamic caliphate. Here the law not only conveyed a sense of justice, but placed it within the context of religious duties expected of the faithful.

Interestingly enough, jurisprudence was essentially borderless at throughout much of civilization, with legal theories being exported around the globe, incorporated into local civilizations, and subsequently modified to suit local purposes. It was not until the rise of nation-states around the 17th century ruled by absolute monarchies that the passage and enforcement of laws  began to assume a more nationalistic overtone. Modern notions of what we now term “common law” became much more prevalent in the west after the Glorious Revolution of 1688. The first stirrings of international law can also be seen in the aftermath of the Thirty Years War when legal scholars first began to theorize about imposing the first notions of the “rules of war.”

Finally, Pirie concludes with a survey of how the evolution of jurisprudence and laws have become a major factor in international relations, beginning with international treaties concerning the conduct of war, particularly the treatment of civilians and prisoners of war. The rise of multinational agencies to regulate commerce accelerated the rise of international law as its own field of legal thought, as multi-national organizations rose to help regulate the flow of maritime and air traffic, rules for the use of communications airwaves and standards, and eventually regulation of international finance as the world’s economy become interlinked and more borderless. Super-national organizations such as the United Nations and the World Trade Organization have almost become law making bodies themselves, setting international standards for all manner of diplomatic and economic relationships.

This is a fascinating and easy to read survey history that avoids legal jargon and deftly combines history, anthropology, and legal analysis to provide an excellent introduction to why laws were made, how they evolved, and what they mean to human society. As the author notes, laws are intrinsically neither good nor evil, but can be twisted to suit any number of purposes depending on the author’s intent. It is up to those that create, enforce, and choose to live under those laws whether they establish justice or despotism.