The Ruined House: A Novel 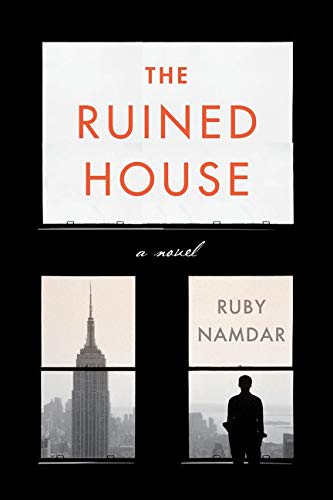 Ruby Namdar’s ambitious, multidimensional, and beautifully written first novel, second book, and first book translated into English The Ruined House (Habayit Asher Neherav, 2013) is the first and last book by an Israeli ex-pat author to win the Sapir Prize, Israel’s equivalent of the Man-Booker. After awarding the 2014 prize to Namdar (who has lived in Manhattan since 2000) the rules were changed to exclude Israeli authors living abroad.

The subsequent rules change is not only insular, narrow minded, and parochial, it’s also ironic, since on one level the book that provoked it is an Israeli outsider’s critique of Jewish diaspora elites. Namdar earned a masters degree in anthropology, and another dimension of the novel is as an ethnographic study focusing on one elitist Jewish-American academic undergoing a midlife crisis, a subgenre of fiction familiar to readers across languages and national borders.

Yet another dimension of the novel is the supernatural/magical realist aspect, since its main character NYU comparative culture professor Andrew P. Cohen’s midlife crisis takes the form of a kind of dybbuk, specifically psychic possession by the soul of the last High Priest who was killed by the Romans when they destroyed the Second Temple in Jerusalem in 70 CE and might also be an ancestor of Professor Cohen who is a member of the priestly clan. The titular ruined house is that very Temple, but an analogy is also made to New York as the novel’s action unfolds over a single year starting in September 2000 and ending just before the attack on the World Trade Center with an epilogue just after.

In the Hebrew edition of the novel Namdar’s text is preceded by an epigraph omitted from the English translation consisting of four lines of verse from Streets of the River (Rehovot Henahar,1950, not available in English), the book length poetic lamentation for the Holocaust by the late right wing Israeli poet Uri Zvi Greenberg, that compares the silenced instruments of the court musicians and the destroyed Temple alter to the unused desk of a blocked writer and seems to regret that Jewish throne and alter nationalism was stillborn and foreclosed when the kings and priests of Judah went into exile after the Babylonian conquest.

While that epigraph no doubt pleases Israel’s right-wing leaders and might have alienated liberal Anglophone literary fiction readers it may indicate ambivalence on Namdar’s part toward his own and Andrew’s diaspora lives and at least partial agreement with fellow Israeli novelist A. B. Yehoshua’s statement that it is impossible to live a fully Jewish life outside of Israel. Critics and readers should of course separate authors from their characters, but Namdar brings them together by giving himself a Hitchcock-like cameo appearance when Andrew passes a stocky, swarthy Israeli man Namdar’s age at that time (shortly after Namdar’s arrival in New York) walking two dogs near Andrew’s apartment building.

Andrew’s visions of the High Priest performing the sacrificial and other rituals in the Temple will be familiar to only the minority of Jewish readers who pay close attention to the Avodah section of the Yom Kippur liturgy, but Namdar provides source texts from the Mishnah, Gemara, and Hebrew Bible.

The novel is divided into seven books, and at the end of each of the first six books there are four- to nine-page sections in gray paper with text arranged to resemble pages of the Talmud. In the center of the page is Namdar’s imaginative interpretative narrative of the ritual of the High Priest and in the section at the end of Book Six his murder and the destruction of the Temple, with the source texts surrounding it in the margins above, below, and on both sides. This is the inverse of an actual page of Talmud where the Mishnah and Gemara (both of which quote verses from the Hebrew Bible) are in the center of the page and the interpretative commentaries are in the margins. Andrew’s visions appear in the main body (the white pages) of the novel in italics.

Some inquisitive readers may enjoy the source texts while to others their presentation may feel like a document dump. This is not a book for lazy readers (except for the visually impaired, skip the audiobook; this book needs to be read with one’s eyes), yet at the same time the novel itself might have benefited from editorial trimming.

Chapters begin with the date on both the Gregorian and Jewish calendars, though Andrew clearly doesn’t know what day it is on the Jewish calendar, doesn’t realize it is Rosh Hashanah until he sees his fellow Jews going to the Hudson River for tashlich. And that is indeed the point; Andrew has an expert knowledge of World Civilization but only a sketchy knowledge of his own Jewish one acquired in synagogue Sunday school, Jewish summer camp, a summer in Israel as a teenager, shorter Israel trips as an adult, on the most recent of which he saw a movie about the ancient temple with detailed descriptions of the priestly rituals, and annual Yom Kippur synagogue attendance.

When we first meet Andrew he is a 52-year-old aesthete and professional arbiter of taste at the top of his game. In addition to his scholarly publications he also writes for The New Yorker, The New York Review of Books, and Harper’s magazine and is a current or former board member of numerous cultural institutions.

Eight years ago he divorced his wife Linda and left her, their daughters, and the cluttered house in Brooklyn, and now resides in a spare and impeccably decorated Manhattan apartment on Riverside Drive and 108th Street with views of Riverside Park and the Hudson River, where he hosts dinner parties matching the guests with the same care with which he matches the wine and the food he masterfully cooks himself. Though he teaches at NYU he prefers to live within walking distance of Columbia University.

Andrew’s girlfriend Ann Lee is a former student half his age, and he prefers to keep the relationship discreet. He keeps in touch with his daughters Rachel (a graduate student) and Alison (a middle schooler), and with Linda, has befriended her new husband George, but he keeps them at arm’s length.

Rachel complains to her boyfriend Tom, “You know all that fake warmth, that ‘we must find time to have lunch together,’ is just his way of saying that that’s all the time he intends to give me.” She then calls her father passive-aggressive for implying that she is the busy one. “He’ll never say it’s him who has no time or finds it inconvenient. That’s not his style. His method is to make you feel embarrassed for wanting to bother him.”

Andrew’s psychic possession takes the form of dreamlike visions. Already in the first chapter Andrew is aware that something is wrong, and by the second half of the book if writer’s block, erectile disfunction, an inability to keep appointments and a need to leave early when he does, taking on the High Priest’s aversion to menstrual blood, and a paranoid hypersensitivity to how others perceive his increasingly disheveled appearance are not each a sufficient cause to seek professional help their combination should be. And though Andrew had been in psychoanalysis several years earlier, Namdar lets his protagonist’s life unravel unassisted, with his nearest and dearest, whom he has all but pushed away, withdrawing from him rather than intervening, until he experiences a complete breakdown.

One of the lessons this complicated book conveys is how difficult it is to achieve the golden mean, balancing a serious writer’s need for solitude to reduce distractions with the need to stay connected and involved with one’s family and loved ones on the one hand, and integrating knowledge and appreciation for global culture with an intimate involvement with one’s particular tradition and civilization on the other. If the consequences of failing to achieve those balances are not as dire for most of us as they are for Andrew, nonetheless many of us would benefit from a closer examination and recalibration. Extending the metaphor on a national and international scale to include the 9/11 attack may seem like a stretch, or is it?