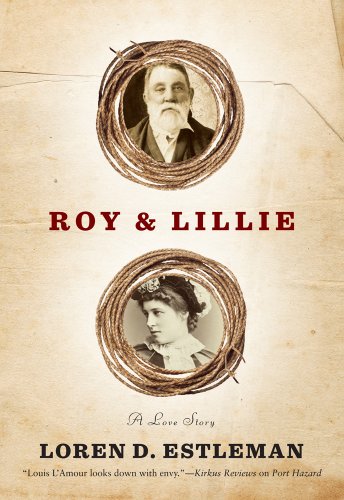 When the infamous Texas jurist Roy Bean first laid eyes on a picture of Lillie Langtry—one of the great beauties of the late nineteenth century—the grizzled scoundrel was completely, irrevocably smitten. For two decades, he wrote to her from his dusty little Old West saloon, and the international stage actress actually wrote back. To put this in more modern terms: It’d be as if Che Guevara carried on a twenty-year correspondence with Marilyn Monroe.

The question of what, indeed, these two would have to say to one another is at the heart of Roy & Lillie, Loren Estleman’s lively paean to two oversized personalities. This author of an impressive list of westerns and mysteries re-imagines the contents of that (mostly) lost correspondence between a woman always in the spotlight, and a rough but dedicated devotee. The result is a vibrant portrait of an affectionate relationship between a woman who wasn’t really a lady, and a lawman who played loose with the law.

What these two had in common was fame. Lillie Langtry was born a rector’s daughter on the Isle of Jersey, but her marriage to a gentleman pauper soon brought her to the attention of London society. Her natural beauty was a sensation, and it was only a matter of time before scandal followed.

Roy’s fame, on the other hand, grew from a series of adventures. As a young man, Roy managed to escape his own hanging because of his ways with the pretty Mexican girls. Later, settled in his own saloon, he conned his patrons by charging a penny extra for “ice-cold” beer that was poured over a lump of glass. Because he owned a Colt and an old copy of Texas State Statutes, he was for twenty-odd years the only Law West of the Pecos.

Considering Mr. Estleman’s background, it’s no surprise that Roy’s whiskey-soaked voice dominates this novel. As a result, reading this book is a little like rocking on a porch with your grandfather—that is, if your grandfather is a garrulous western rascal who cares more about the tale than the truth, and spends most of his time talking around a lump of chaw.

Despite the spitting, you can’t help but stay for the next yarn.

Reviewer Lisa Verge Higgins is the RITA-nominated author of thirteen historical and contemporary novels. Her next book, The Proper Care and Maintenance of Friendship, will be released by Hachette in January 2011.