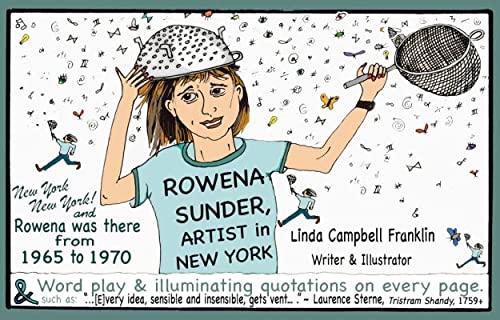 Wearing a colander on her head to catch ideas and holding a net in her hand to grab them as they fall around her, Rowena Sunder left Toledo for New York City in 1965 to chase those ideas as hard and fast as she could.

An inspiration for anyone who has ever wanted to create, writer and illustrator Linda Campbell Franklin has given us an adventurous heroine whose daily landscape is the connection between the mind and art. Life and art isn’t just observed, it is celebrated in these acts of inspiration and creation.

Working inside the wide parameters afforded the format of the graphic novel, Franklin tells us of Sunder’s five year stay in NYC at the end of the sixties. It is a story written and fueled with the energy and focus of youth joined by an unashamed confidence and an admirable pride in what her mind can both see and do.

Others may scoff, or want her to marry an accountant, but her mission is clear, what Sunder sees in her head has to manifest itself somehow in an artistic medium. Even if it means that instead of painting shoes, she actually paints them.

As artist and writer of Sunder’s story, Franklin uses every piece of space that the format of a graphic novel offers. Sometimes allowing a single panel filled with color to serve the story and other times creating a packed, dense page featuring anything from a miniature play to hints on how to actually write a graphic novel.

Anchoring each page is quote from a writer, artist, or essayist that expands and comments on what Sunder is experiencing at the time. There is Kurt Vonnegut Jr. speaking of time and William Wordsworth reminding us that the streets of 150 years ago are just as interesting as the streets of 1968.

The words of Jim Carroll, Jack Kerouac, Erica Jong, or French Mathematician Michel Rolle all build on her ideas. In these quotes Franklin reminds that what we create and think is often connecting to something else, that the act of creativity itself is both universal and solitary.

No idea tells the tale of Sunder more sweetly and simply than when, near the end of the tale, Franklin quotes Andre Breton’s Surrealist Manifesto 1, 1924. “Thoughts come to me so rapidly and continued to flow so abundantly. . . . I lost a whole host of delicate details, because my pencil could not keep up . . .”

Connecting the overflow of ideas that flood into her brain is not a problem for the young Sunder. She finds inspiration and moves what her mind sees straight to art. On Lexington and 30th Street she spies a tiny mouse stuck on a glue trap. The sight inspires the art that results in her first sale.

Laying high-quality watercolor paper in the streets so that it can be run over by vehicles, she sometimes marks the paper with ink or with garbage. The resulting random tread marks create completely individualistic and unpredictable designs. The owner of a Greek coffee shop where Sunder eats loves what she has done and puts them on his wall. A psychotherapist buys all ten.

Franklin isn’t blind to the trouble that a young single woman in NYC can experience. Short episodes, like a Raymond Carver short story written on a single comic page, tell about a newly grown ponytail that leads to an encounter with someone who wants to “slap her flank” like a horse. Another gentleman, seeing that Sunder has just bought several pairs of shoes, offers foot rubs. . . . Whether it’s 1967 or 2017, it’s the same shit, different day for any woman who leaves her house.

The story not only embraces Sunder’s love of both art and the act of creating art. Franklin brings parts of the sixties into the picture at exactly the right moment as we begin to see Hari Krishnas on the street. Then we stop by the legendary club Electric Circus to meet an ocelot. In a quiet way this is also how the city changes in reaction to how society (and Sunder’s conception of what is of art) is changing.

Franklin uses parody, playwriting, puns, collage, photographs, standard narrative and monologues, basically whatever she feels is best for that page, in the narrative as she moves Sunder through her experiences across the island of Manhattan.

The art is close in feel to the curvy lines of Cathy Guisewhite’s now retired daily comic strip Cathy with more than a touch of the feel and depth that Roz Chaste brought to her work in The New Yorker. Franklin arranges her panels with same deft efficiency and deep understanding of exactly what needs to be said that Will Eisner brought to his early work in graphic novels. There is clutter, but there is an easy-to-follow logic to where Franklin is taking you.

Using Sunder as an example, Franklin also demonstrates how art, again often created by a single person in solitude, is truly part of a larger world. Her ideas celebrate not only herself, but others. Across her pages Franklin celebrates dozens of artists from her own community such as Nancy Linden, Greg Fletcher, and Alice Redmond in pages that feature their work as shown in a gallery or in life.

A long-lived creative entity, Franklin leads by example. Near the end of the book she drops a quote that sums up Sunder and, despite her denial in the opening disclaimer, by extension Franklin herself, with perfect simplicity.

“Normality is a paved road: it’s comfortable to walk, but no flowers grow on it.” —Vincent Van Gogh.

If you know an 18 year old or an 80 year old who is in love with the creation of art, there is no better book for them to read today.