Rose Kennedy: The Life and Times of a Political Matriarch 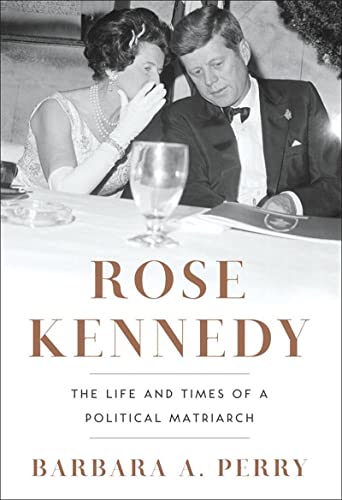 “Neither heroine nor villainness, Rose Kennedy shines through as an extraordinary human being.”

The mother of nine children, many who attained greatness, Rose Kennedy also experienced a grief so monumental most people would find it incomprehensible. Rose Kennedy: The Life and Times of a Political Matriarch is the first work to focus on Rose Kennedy in more than two decades. (Another work, Iron Rose by Susan Crimp and Cindy Adams, came out in 1995.)

In the art of biography, two major themes are perspective and change. While no shortage of biographies have been by and about the Kennedy family, there have been very few about Rose Kennedy. This unique perspective leads to the theme of change, be it historical, political, and/or personal.

Rose Kennedy, born in 1890, was an individual who preserved her Victorian values into her adulthood. Combined her with super longevity—passing away in 1995 at the age of 104—she carried herself informed by values of prudence, decency, and industriousness. (Another famous political figure who preserved his own Victorian morality was British Prime Minister Winston Churchill.)

Ms. Perry, who wrote a biography of Jacqueline Kennedy, does a fair job balancing the positive and negative aspects of Rose Kennedy's life. Neither hagiography nor hatchet job, Rose Kennedy seeks to add value to the immense literary and historical corpus by delving into the family archives.

The access to the archives of the Kennedy family reveals Rose Kennedy as domineering, image obsessed, and defensive—depending on the situation, not necessarily bad attributes. Despite belonging to a political family and marrying Joseph P. Kennedy, a member of a rival Boston political clan, Rose kept out of the political limelight. She chose to concentrate on raising her large family and once Jack, Bobby, and Teddy became active in political life, she set about protecting the Kennedy legacy and establishing the mythology of Camelot.

The image management and public relations around her children did have a negative side. After her husband Joe, the former ambassador to the Court of St. James, unilaterally decided to have her developmentally disabled child, Rosemary, undergo a lobotomy, Rose kept the information secret for decades.

As times changed, so did Rose, adapting to the changing media and American cultural expectations. Her behavior toward Rosemary illustrates this, with Ms. Perry writing eloquently about Rose Kennedy's struggle between keeping a positive spin on the Kennedy Family in the media and her guilt about how Rosemary was treated. In the end, Rose helped establish the Special Olympics as well as helming several foundations organized to benefit the mentally retarded.

Ms. Perry's digging through the archives reveals information long since buried in order to maintain the facade of Kennedy integrity, especially in regard to Rose. Because the public has seen Rose Kennedy as a kind of secular saint, institutions seek to bury unpleasant truths.

(The Wikileaks, Bradley Manning, and Edward Snowden scandals point toward a public accepting and even demanding more transparency from institutions built upon secrecy and lack of public oversight. As Sean Wilentz related in his recent history, The Age of Reagan, terrorism and the secrecy of the national security state have made it more challenging for historians and researchers to do their jobs. One can't tell the whole story if one doesn't have all the information about the story.)

For fans of the New Frontier, Camelot, and the Kennedy Mystique (and Curse), Ms. Perry's book sheds light on this much talked about family. She adds to the relatively small pile of books written about Rose Kennedy, a woman who endured incomprehensible tragedy and who lived for nearly half the life of the American republic.

Neither heroine nor villainness, Rose Kennedy shines through as an extraordinary human being. Ms. Perry brings a much needed human face to a family that has become populated with historical icons and mythological archetypes.