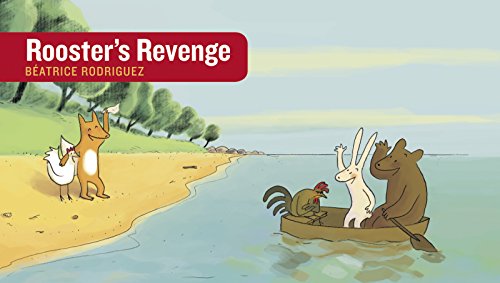 “What to say of the overarching effect of this delightful trilogy? That the world is full of possibilities, that things are not always what they seem, that we must adjust to myriad changes, some of which are beyond our control. And when we do so, we discover unexpected joys. Just ask Rooster, who found something better than revenge.”

What’s a jilted Rooster to do? In this conclusion to the wordless picture book series that began with The Chicken Thief (2010), Ms. Rodriguez launches another wild adventure marked by whimsy and a surprising amount of inner growth for her deftly drawn characters.

Harking back to the first book, in which Bear, Rabbit, and Rooster chase Fox and his hen-napped bride-to-be, Rooster’s Revenge features the lover left behind. The Rooster’s grim mood stands out even on the cover, resplendent with the sprightly palette of green, gold, and blue that dominates the trilogy’s illustrations.

The other four friends smile and wave goodbye as Bear rows the boat with Rabbit and Rooster beside him. Only Rooster scowls and slumps his shoulders, oblivious to his friends’ good will. Children who have not read The Chicken Thief will not understand why Rooster is glum, but can still enjoy the journey upon which he’s embarking.

A sudden, fierce storm flings the animals’ rowboat upon an island that night. Beneath a plum-colored sky speckled with stars, an exhausted Bear and Rabbit lie draped upon large rocks. With sly humor, Ms. Rodriguez shows Rooster, despite his desperate situation, sitting on the rock with that same grouchy profile, the portrait of one obsessed with a grudge. He persists in pouting even as kind turtles carry the three stranded friends into a cave.

And what a cave! Within its eerie purple walls lies a gigantic skeleton of some strange creature. This is where Rooster’s mood shifts suddenly, as before him, a perfectly round, pale green egg glows. Rooster lifts the egg and embraces it. By the time his friends awake and notice his wings wrapped around the egg, Rooster’s expression, with dark slanted eyes and sharp, pointed teeth, has become sinister and greedy.

As with the previous books, Ms. Rodriguez takes us on an unpredictable chase, this time with Rooster taking the lead with his large, lovely egg. The first oddity the animals encounter is strangely glowing golden newts with bright orange stripes. Bear looks dismayed when one smiling newt latches onto his back. Outside the cave, they find a bizarre landscape filled with shining, giant orange mushrooms, from which bats dangle inside the caps.

Rooster appears possessed by demons as he sails off on an upturned mushroom, leaving his dismayed friends stranded on the shore, with the bats descending upon them. He only has eyes for his precious egg.

Yet Ms. Rodriguez again pulls off a swift, sweet denouement, her characters converging upon a charming fairytale cottage, complete with new friends and a baby dragon for Rooster to raise.

What to say of the overarching effect of this delightful trilogy? That the world is full of possibilities, that things are not always what they seem, that we must adjust to myriad changes, some of which are beyond our control. And when we do so, we discover unexpected joys. Just ask Rooster, who found something better than revenge.