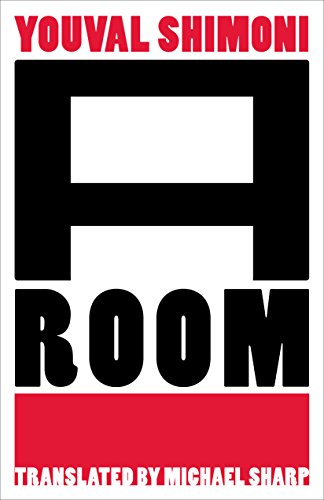 On the evidence of A Room (Kheder in Hebrew), the second of its author’s four fiction books and the first to be translated into English, Youval Shimoni is a writer’s writer whose work will appeal to those who enjoy experimental fiction to whom he offers a two-for. A Room comprises two novels, The Lamp and The Drawer, and a short story, “The Throne.” The Lamp is almost twice the length of The Drawer, and “The Throne” is but 13 pages. A French translation of The Drawer was published as a separate novel in 2004.

In The Lamp Shimoni invents a new way to write a novel, one in which a thin plot serves as a framework that supports its characters’ long parenthetical digressive flashbacks (most of the text is in parentheses [but within the longer parenthetical paragraphs the text is further divided by brackets {and in one such paragraph within the brackets the text is further divided by braces} ] ) taking the form of the third-person narrative equivalent of interior monologue from the perspectives of multiple characters written in dense stream-of-consciousness prose somewhat reminiscent of James Joyce’s Ulysses.

The Room has been compared to William Gaddis’ The Recognitions and to Thomas Pynchon’s Gravity’s Rainbow, in both of which a main plot and discursive digressions alternate. But the digressions in both The Lamp and The Drawer greatly outweigh their central plots, and except for one character in The Lamp who quotes Shakespeare and another in The Drawer who discusses art history it lacks Gaddis’ and Pynchon’s erudition.

The Lamp’s central plot is set on an air force base in The Negev where an IDF entertainment troupe is shooting a training film about the proper use of gas masks around the time of the First Gulf War during which Iraqi poison gas missiles were fired into Israel, and where an explosion occurs at night in which a man is burned alive. Soon after a detective referred to as “the investigator” is sent to the base to investigate the incident.

The first of The Lamp’s eight chapters, which describes the explosion and the arrival of the investigator, is presented in narrowly indented paragraphs. In normal-width paragraphs the next seven chapters take place before and up to the explosion over the course of a day in which eight characters, three civilians and five soldiers, turn a room on a military base into a film set and wait while the lighting technician (one of the civilians) tries to find and fix a short circuit and loosen a rusted wing nut on a lamp so he can change its angle. In the final chapter the filming commences. Outside the room two soldiers being punished for unspecified infractions rake leaves and play a game of horse by tossing pebbles into a trash bin while a crop duster flies nearby.

Occasionally within The Lamp’s final seven chapters odd paragraphs in a much smaller font flash forward to the detective’s investigation. If he and his publisher were so inclined, Shimoni could release a digital version in which the various narrative threads would be color-coded and interlinked so that the reader could read them in whatever order she wished.

In addition to the lighting technician the other civilians include the sound technician and Noam Schechter (mostly referred to by his surname), the film director. The five soldiers include a snarky loquacious male actor whose nickname is Miki Le Mic and who is fond of quoting Shakespeare; two 18-year-old recently conscripted female actors, Kinneret and Na’ama; Gidi (short for Gideon), the master sergeant who is the entertainment troupe’s commanding officer, as well as the film’s producer, assistant director, and cameraman; and Gidi’s administrative assistant Merav. The two soldiers being punished outside are Weintraub and Ezra, and an unnamed female medic makes cameo appearances.

Some of the most descriptive of the parenthetical digressions are the sound technician’s recollections of his post-army trip to India and Thailand and a trip 12 years later to Myanmar and an island in the Gulf of Thailand after the end of his marriage and the resulting estrangement from his son.

“All around, the thicket gathered and crowded together with all its insects and bugs and hidden troops of monkeys, which every day came closer and were already identifiable here and there, besides by their screams, by their darting leaps as well as by the movement of branches in their wake. Not only was his job forgotten there—recording for filmed commercials that glorified banks and soft drinks and the Rolls Royce of air conditioners and refrigerators, as if the world was founded on them—but also his son and the mother of his son; that’s what he told himself every morning on opening his eyes under the mosquito net, and in the window across from him was the smooth and pellucid ocean leaving the fishermen’s boats to momentarily carve trails of foam in it.”

Schechter is also nostalgic for his student travels in Italy and France, for his French former girlfriend, for the honor of having one of his short films screened at the Cinematheque, and regrets that he never got to make a feature length movie. Where Schechter’s career has declined to the point that this instructional film is the only work in his field he can get, Gidi brings real enthusiasm to the project, even bringing his own camera from home.

Like most of the film crew Gidi is working class; he and Merav are Mizrahi (the children or grandchildren of Jews from Moslem countries). And his digressions revisit his failed attempt at civilian life balanced by the joys of marriage and fatherhood. Writing from the perspectives of Gidi and his unnamed wife, Shimoni poetically compares the desert at night to the body of a black woman from a fashion magazine, and the lights of one of its towns viewed from a distance to pearls she is wearing.

Na’ama is also working class, unlike Kinneret whose parents are artists. In one of Na’ama’s digressions with a mixture of pity and affection she recalls seeing her overweight mother leaning on the balcony of their apartment in her underwear late at night watching her unemployed husband (Na’ama’s father) sitting at the kitchen table chain-smoking, and admires the desire her parents still have for each other despite their age related diminished appearance and reduced circumstances. In other digressions she experiences empathy toward strangers, including when overhearing a poignant conversation while standing in line at the bank.

Like Gaddis’ The Recognitions and George Perec’s Portrait of a Man Known as Il Condottiere (also reviewed on NYJB), A Room’s second novel The Drawer has a visual arts theme. The novel is an allegory on renaissance artist Andrea Mantegna’s painting “Christo in Scurto,” whose English titles include “Lamentation of Christ,” “Lamentation over the Dead Christ,” and simply “Dead Christ.”

In the painting the dead body of Jesus, which has been removed from the cross but has not yet been resurrected, is shown laid out on a slab from a perspective that foreshortens the figure emphasizing the thorax and genitals while also showing the holes in the hands and foot. To the left of the recumbent figure are two realistically portrayed late middle aged or elderly female mourners.

In The Drawer, which is set in contemporary France, the mourners are two elderly Parisian former prostitutes, Agnes and Nadia, the Christ figure is a bearded clochard nicknamed Yangtze, and an Israeli painter is the narrator and the fourth member of the group, “three beggars and an art student,” whose nighttime ramblings through the streets of Paris lead them to a hospital morgue. The refrigerated drawers give the novel its title and where the three will recreate the scene in Mantega’s painting that the painter will paint. The Drawer’s characters set the scene to be painted as the characters in The Lamp prepare the air force base room to be filmed.

Like in The Lamp, the prose is dense, literary, and often handsome, but unlike it the narrative is not divided by parentheses or brackets, though its ten chapters are organized into conventional subchapters. The characters’ reminiscences take up much of the narrative along with occasional historical anecdotes in the manner of Milan Kundera that focus on art history rather than philosophy. Also unlike The Lamp, which is set in Israel with Jewish characters and includes references to Jewish holidays, The Drawer has a foreign setting, a Christian motif, and except for the Israeli painter, gentile characters.

The Room’s final text, “The Throne,” is a fictional scholarly paper (including footnotes) about an ancient Chinese high priest’s plan to create a monument to Huan (perhaps Duke Huan of Qi, 685–643 BCE, the first of the Five Hegemons of the Spring and Autumn period of Chinese history). The plans go through several versions, each abandoned for the next. At one point it is decided that the monument should represent Huan’s throne instead of Huan himself or his soldiers and servants—thus explaining the title—but this version is also abandoned in its turn.

Like The Lamp and The Drawer “The Throne” focuses on the process of conceiving and/or creating a work of art rather than the final product. A review in a different periodical complains that the effort required to read A Room is not rewarded in the end, but the point that eludes that review is that this novel’s reward or product is indeed the very process of engaging Simoni’s challenging prose and its characters’ inner lives.

Most American readers will find South African born translator Michael Sharp’s Commonwealth English understandable if occasionally awkward. A Hebrew phrase that literally means “to the end,” and which an American translator might render as “the whole nine yards,” Sharp translates as “to the back teeth.”

A Room is strongly recommended to readers of post-modern and experimental fiction who enjoy stream of consciousness narratives and who are willing to delve deeper than a thin plot’s surface level.