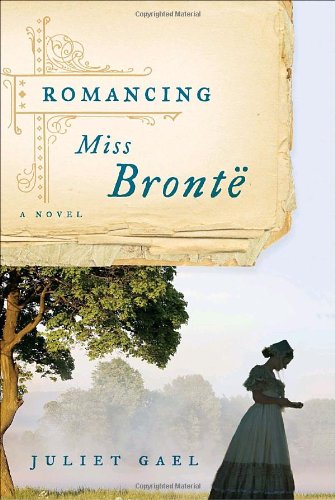 As a reviewer I truly believe one of the hardest tasks a writer can undertake is to tell a story of which readers already know the ending. It takes skill and talent to keep someone enthralled by a tale that they know will end badly.

Thus the story of the Bronte siblings is especially hard because of their ultimately tragic and cruel fate. They were such talented writers so ahead of their time, but they suffered more than their share. However, Juliet Gael not only has taken on the challenge, but has also succeeded in doing a decent job of making it an interesting and inventive narrative.

In Gael’s Romancing Miss Bronte, we get an intimate look into the life of Charlotte Bronte, including her family, short lived romance, and of course the writing of Jane Eyre. Focusing on the courtship of Charlotte by her father’s curate Arthur Nicholls, Gale also manages to weave a tale of the Bronte sisters’ secretly published works and everyday familial life. While the book is interesting in the way that it makes Charlotte a character and a woman, it sometimes lacks a certain spark and can read more like a highly researched biographical piece. Somehow the characters lack fire and the deaths of siblings is detailed in a very offhand manner—missing the true experience of ache and longing Charlotte must have surely felt.

However, a redeeming factor in the book is the narrative of the struggle Charlotte Bronte made in whether or not to accept romance in her life. After writing one of the best love stories in literary history, could she really settle for such polite affections and a less than advantageous marriage? This inner turmoil and the disagreement with her father regarding the match create a lively and engrossing narrative not seen in the early chapters. It is redeeming for the book and makes the ending of much greater emotional interest to the reader.

Romancing Miss Bronte, while not exhibiting the emotion expected of a biographical fiction of the Brontes, still manages to weave a creative narrative that any Bronte fan will enjoy and eagerly want to read. The book also will educate many readers and fans on the finer points of the lives of the Bronte siblings, which are not common knowledge. All in all Gael has presented a fine read for literary enthusiasts and Bronte fans alike.