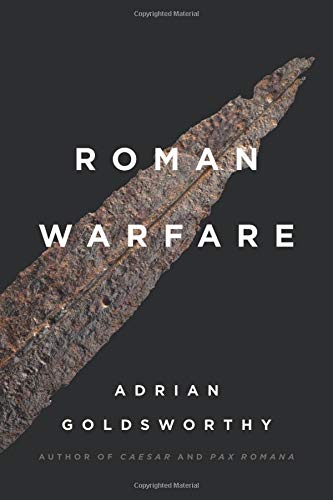 “The Roman way of war not only dominated the ancient world and led to the rise of Europe’s longest empire, it continues to educate and fascinate readers today.  This way of war was relentless, patient, total, and adaptable as Goldsworthy communicates in this short but instructive book.”

The Roman Empire had the most effective military machine of the ancient Western world. Although not as martial as the Spartans, the Roman Army was more strategically successful and set the standard for military professionalism for well over 1000 years until the rise of dynastic armies in post-Renaissance Europe.

Adrian Goldsworthy, foremost authority on ancient Rome, has written an excellent primer on the Roman Army that is now back in print from a new publisher. While it is not meant as a comprehensive battle narrative of Rome’s numerous wars, the book does provide a wide-ranging but impressively concise account of the changes and influences in Rome’s military machine from its founding until a century after the final Western Emperor is deposed, describing how the Roman military machine was able to create and maintain a Pax Romana for so long with a relatively small force. Goldsworthy credits the enduring Roman military success to a combination of discipline, training, superior tactics, and an unmatched ability to meet a constantly evolving security environment and a variety of enemy forces.

Tactically, Goldsworthy credits not only the Roman Army’s discipline and training, he shows how the vaunted Roman legions, organized into the manipular formation of three lines of infantry arranged in a spaced checkerboard battlefield array, provided an innovative and flexible formation that allowed more tactical flexibility for the army commander, especially the ability to commit reserves at the critical moment. This formation served the Roman Army well during the Punic and Greek Wars, even though Rome suffered several crushing defeats at the hand of the brilliant Carthaginian general Hannibal.

In Goldsworthy’s view, as the Romans faced fewer peer adversaries in the first and second centuries, and the size of the individual legions was reduced to expand the numbers of legions, the Romans did a superior job of adapting to a new style of warfare based on smaller units either hunting down barbarian raiding parties or conducting punitive raids against untamed tribes along the Roman frontier.

An additional part of the ability to maintain a war machine through years of war was the Roman desire for total victory—the total defeat and subjugation or assimilation of an enemy, whereas most ancient wars were fought for limited periods and for limited objectives. Thiers was an atypical view of warfare in the ancient world, which gave Rome a strategic advantage by ensuring the support of the population for the duration of the conflict, even when the army suffered battlefield defeats.

However, as the army become more professional it also became more politically and socially separated from Roman society yet more involved in Roman politics. This led to a gradual weakening of the overall power and influence of first the Imperial Senate and later the emperor as the army become involved in numerous civil wars for control of the Empire.

The inability of the emperor to truly control the army, combined with the need to provide security against increasingly assertive barbarians such as the Visigoths and Ostrogoths in the second and third centuries led to a gradual decentralization of Imperial power. The subsequent dilution of the Roman army with these outside tribes as part of the Empire’s standing army certainly contributed to the dissolution of the Western Empire.

As more fragmented kingdoms began to assume greater independence from Imperial authority, according to Goldsworthy the Western Roman Empire didn’t fall, it just sort of disintegrated into a collection of smaller fiefdoms that maintained their own force of men-at-arms independent of the Roman army and Imperial rule.

The Roman way of war not only dominated the ancient world and led to the rise of Europe’s longest empire, it continues to educate and fascinate readers today.  This way of war was relentless, patient, total, and adaptable as Goldsworthy communicates in this short but instructive book.