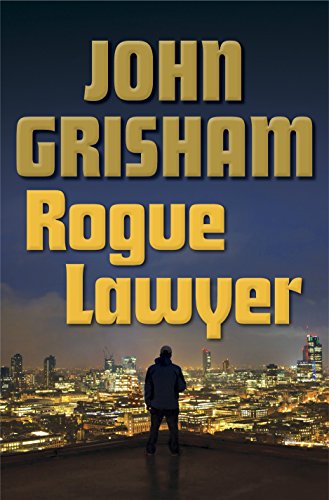 In Rogue Lawyer, John Grisham sheds light on the sometimes underhanded manner in which the defenders of the law don’t so much defend as work their way around. The name of the game is winning, not justice.

His hero, Sebastian Rudd, serves his title well—he is a rogue lawyer. Rudd is the man who takes all the jobs that other lawyers dash away from. As a result, he must deal with the seedier side of the law and often finds himself participating in those same seedier activities in order to win his case. Although he sometimes skirts the law as we have come to know it, it is difficult to dislike Sebastian Rudd.

Rudd is a little rough around the edges—his office is in a large black van, outfitted with chairs, a table, a small refrigerator, and a hiding place for his gun—all of the accouterments any successful lawyer needs, his office just happens to be mobile. His home is a sparsely furnished 21st floor apartment where he does not spend a lot of time. Rudd has a son, Starcher, and is divorced from a lesbian lawyer ex-wife, Judith, and can count on one finger his only good friend, Partner, who also happens to be his bodyguard.

Grisham’s approach to this story is different from the norm. The book is written in six parts, rather than chapters. Each part is numbered with about 20 (+/-) scenes. At first glance, it seems that there is no one storyline in Rogue Lawyer, but rather a collection of short stories that talk about Sebastian’s cases and what he has to deal with to get justice for his clients. But on closer inspection, connections weave from one story to another and Rudd is the main thread.

The first case in the book is about a young teen who has danced on the far side of the law most of his life, and is accused of molesting and murdering two young girls. The case is riddled with improper actions on the part of the prosecutor, the guards, and the judge. Their interest is only in getting a conviction and moving on. Since this part, or story, is indeed short, Grisham is on a tight time frame in which to complete it, and it almost seems that there are some conveniences that Rudd finds and uses to exonerate his client.

While each part has its own flavor, as the book moves through Part Two and beyond, Grisham brings previous story lines into each new tale, thus expanding and building layer upon layer of plot. Grisham presents Rudd in the first person, present tense, and by doing this, the novel is character driven with the focus on Sebastian Rudd. Grisham does not veer away from this point of view, but remains in character throughout the book, allowing the reader to view events from inside Sebastian Rudd’s head.

With each new part, Grisham adds to Rudd’s personality through experiences that threaten him, his son, and his friend. He faces challenges directly and is not afraid to employ the same tactics on his pursuers that are employed upon him. He is not beyond extortion, threats, or blackmail, if done in the pursuit of justice.

Grisham does not name the city in which Rudd works—simply refers to it as the City, most likely because he paints a depressing picture of the backroom politics and questionable law enforcement tactics that are used to bring down even the innocent just to win and move on to the next victory.

Some of the stories Grisham tells are disturbing—SWAT team invasions of the wrong house resulting in deaths and a coverup, kidnapping of Rudd’s son, sex slave trading, just to name a few. And while Rudd’s handling of these cases may stretch the law, we cheer him on.

It may be fair to say that we have not seen the last of Sebastian Rudd. One can only hope. This is a great read, fast moving, and belongs on every library shelf.