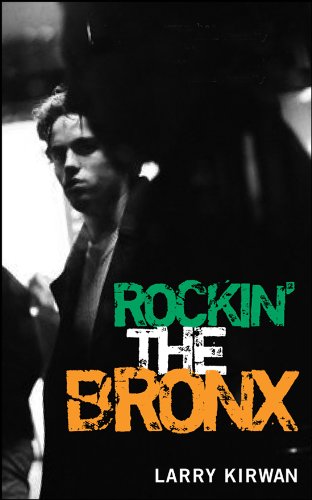 Rockin’ the Bronx is a tragic tale of home-from-home and heartbreak. Set in the early eighties on the down-at-heel streets of the Bronx, New York, the novel is narrated by the fresh off the boat (or Aerlingus jet) Sean Kelly who has left his small Wexford town behind in search of the girl who loved and left him. Through Sean, Larry Kirwan leads the reader through the haunts and dives favored by the Irish brickies and nannies working themselves to the bone and drinking themselves to death.

Sean is a wannabe rock star cursed with small-town naivete and a fragile emotional makeup. He arrives on American soil with a serious cash deficit, his favorite records, and a guitar strapped to his back. It doesn’t take long for him to find his girl, Mary, though she is not the person he remembers. She is a detached and cold wraith who has moved on to a whole new existence, and it seems as if there is no room there for Sean.

But if nothing, the protagonist is dogged, and he moves into her apartment in the hopes that things will change. And so they do. Sean is reformed not only by the Bronx and this new Mary, but by her housemates, Danny and Kate. As the narrative develops, Sean realizes that he has become the newest member of a dysfunctional family that is rife with unrequited love and lust.

Larry Kirwan writes with a voice not dissimilar to Frank McCourt’s, though it suffers the occasional overenthusiastic flourish that can be a little distracting. The prose is sometimes as authentically Oirish as a rusty bicycle in a theme pub window. But this is a minor distraction that is well worth overlooking. There is an honesty about the characters, especially Sean, that would make most authorial indulgences forgivable.

The city that Kirwan presents is so real you can feel the humidity in the air as you read, and the characters are fully-formed and soulful. For instance, Danny, the mysterious Belfast boy, stands out as a serious but charismatic alpha male who almost outshines the protagonist even when his secrets are laid bare to the reader in the final chapters of the book. It is Sean’s pendulum-like sway between hatred and love for Danny that gives him the strength he needs to survive his tortured and self-destructive relationship with Mary, the cause of and solution to all the young man’s problems.

Rockin’ the Bronx is Angela’s Ashes with a young Bob Geldof sneer. Well worth a read if you like your pints black and your whiskey Irish.