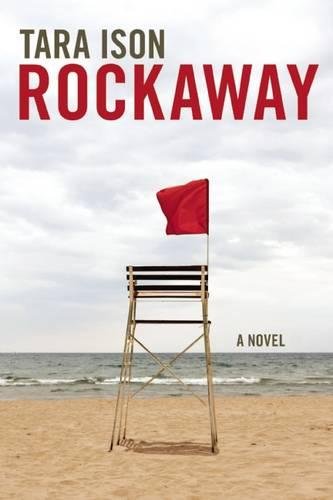 “A writer takes earnest measures to secure his solitude and then finds endless ways to squander it.”
—Don Delillo

Mr. Delillo’s quote also applies the other quiet arts. Sarah is a 34-year-old aspiring painter from the San Diego suburb La Jolla who, with an offer of a gallery exhibition contingent on her creating a new body of work, has arranged an extended stay during the spring and summer of 2001 in her best friend’s grandmother’s house on the beach in Rockaway, a peninsula shaped neighborhood of Queens on the Atlantic Ocean, in order to paint without distractions.

Tara Ison’s third novel Rockaway is an account of how Sarah squanders that opportunity.

Sarah has other reasons to seek a change of scene. Since graduating college with a fine arts degree she has been working in an art supply store and has been the primary caretaker for her invalid parents, a role she has played since childhood.

When Sarah was nine or ten her four-year-old brother died, an emotional blow from which her parents never recovered resulting in a familial role reversal: Sarah became the parent and her parents became childishly dependent on her. Her best friend Emily’s parents became her surrogate parents.

The summer in New York is not only an artist’s retreat but also a test to see if Sarah’s parents can manage without her and a kind of vacation from her filial responsibilities. Shortly before leaving California Sarah breaks up with her younger, immature, and commitment-phobic boyfriend David.

She arrives at the home of Emily’s grandmother (who is in rehab following surgery) with tubes of very expensive oil paints and newly stretched canvases (a mistaken detail—artists usually travel with rolled canvases and stretcher bars and stretch the canvases upon arrival).

Sarah starts out diligently walking the beach collecting seashells to serve as subjects of still life paintings, but allows herself to become distracted by Marty, a divorced, inarticulate, sexually reticent, newly religious pop musician—who had a few hit songs in the 1960s and still has a cadre of loyal fans—and is 20 years her senior.

Marty doesn’t necessarily believe in God but is attracted to the values and structure of Orthodox Judaism. Sarah grew up in a non-observant secular Jewish home.

Having broken up with a flaky younger man, and knowing no one in Rockaway except for the elderly Sri Lankan couple who are Emily’s Nana’s servants, it is understandable that Sarah would be initially attracted to an older man like Marty who is devoted to both his music and his religion.

Why she continues to allow him to distract her from her painting when he respects neither her time nor her artistic calling, and to add insult to injury shows no carnal interest in her, is a mystery.

Still worse is the drinking problem Sarah develops from the time she starts hanging out with Marty. Not only does she drink when she’s with him but also when she’s alone at all hours of the day. And she’s not even spending quality time with him. As often as not she’s just tagging along as he socializes with friends or plays gigs.

In Rockaway‘s narrative passages Ms. Ison’s prose style is lovely and in places lyrical. By contrast the realistic natural dialogue is often banal and appears to be intentionally so.

She presents handsome descriptions and then by juxtaposing normal ineloquent conversation acknowledges that no one in real life actually speaks as elegantly as she writes. Writers from Jane Austen to Aaron Sorkin have composed brilliant banter that is unrealistic; Ms. Ison’s dialogue sometimes goes too far in the other direction.

While Sarah is in Rockaway not painting, Emily is pregnant in rural Connecticut expecting her and her rich husband’s third child. Sarah agrees to be Emily’s doula for the home birth and spends the last weeks of August with her friend whose baby is nine days late. After the birth Emily challenges Sarah’s decision to remain child free, and Sarah declines Emily’s offer to let Sarah try breastfeeding so she can experience the sensation of an infant suckling her nipple.

The bucolic Connecticut interval turns out to be the calm before the storm. After keeping herself together to be a supportive friend, upon returning to Rockaway Sarah starts to come apart, but her breakdown leads to personal growth and insight. What she will do with that insight—apply it to a new work of art or make a life changing decision—is left to readers’ imaginations.

What the future holds for Sarah—will she ever find her true vocation or true love—is unclear, but there is reason for optimism: Better to have a midlife crisis on the cusp of middle age than later on. She is an engagingly complex character readers will hope to see more of should Ms. Ison chose to make her a recurring character in future novels.