Rock Needs River: A Memoir About a Very Open Adoption 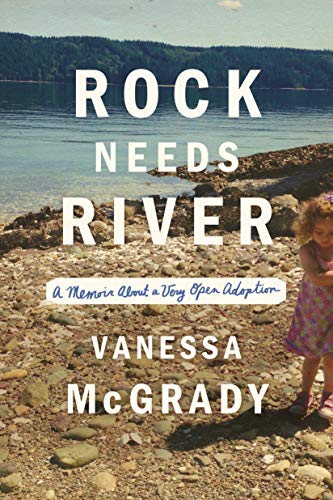 “This is a book about McGrady’s abiding devotion to her daughter, ‘the greatest love of my life,’ and, as such, is a joyous journey to experience with her.”

The first words readers encounter in Rock Needs River by Vanessa McGrady are in a letter to her daughter, Grace. McGrady informs her daughter: “I am telling this story because it is one of the best ways I know how to tell you that I love you and that I didn’t do everything right on this journey, but I did the best I could.”

McGrady’s compact telling of the story of what the subtitle of her memoir identifies as a “very open adoption” has a brief prologue, in which McGrady sets the high bar of self-assessment that will carry throughout her book.

Her daughter’s homeless birth parents knock on the door of her house. They clearly want, need her to ask them in. She does not, cannot do that. And when, after closing the door on them, she goes back to bed, she dubs herself “the worst person in the world just then.”

Replete with humor, anger, sadness, joy, Rock Needs River is a chronicle of relationships, of strangers as a sometimes family, of hope, judgment, frustration, and heartbreak, all on the path of a woman becoming a mother.

In stories from her childhood and early adulthood, McGrady writes lovingly of her divorced parents, and also acknowledges that she received negative messages about marriage, messages that left her with few tools to navigate a marriage of her own.

During one of her earlier relationships, she takes a pregnancy test and it is positive, but the pregnancy is a false one. McGrady calls this a “cruel joke” that makes her realize how much she wants to be a mother. Another relationship follows. They get pregnant. She loses the baby, and they break up.

McGrady takes a transformative trip to Israel to attend her half-brother’s wedding. In a Russian Orthodox church, she finds herself alone in the small cemetery, and hears a voice tell her that it’s okay to ask for miracles. She quietly utters her wish: “I would like someone to love me enough to have a child with me. Please.”

McGrady is diagnosed as being at high risk for pregnancy, and she considers adopting. She gets a full-time corporate job and, at a meeting, meets Peter, the man who will become her husband. He’s attractive, he’s a former rock musician, and he’s in a loveless marriage. He’s also an enthusiastic drinker. In a foreshadowing of difficulties to come, McGrady succinctly sums up the often universal dilemma with alcohol: “Drinking is fun until it isn’t.”

McGrady switches, at times, from the personal to the societal. She outlines a poignant history of open adoption, one that underscores the unkind treatment of women. She marries Peter, and they register with an adoption agency. When the birth parents for her own experience of open adoption appear on the scene, the narrative picks up momentum.

Bridgett and Bill are living a marginal existence in downtown Los Angeles. They are always a breath away from being homeless. One of the first things Bill does when he meets the prospective parents of his child is ask them for money, which they are happy to provide.

McGrady is on a business trip when her daughter is born. She doesn’t want to go back to her job after maternity leave. She wants Peter to encourage her to stop working. But Peter has alimony payments to his ex-wife, and he fears the loss of McGrady’s steady paycheck.

Peter’s smoking and drinking erode the trust in the marriage. He doesn’t think he has a drinking problem, and this denial puts their daughter in potential danger. After only three years, McGrady feels she must give up on their marriage.

After Peter moves out of their home, Bridgett and Bill move in, temporarily. McGrady does everything she can to help them get on their feet. Friends donate needed items to the young couple. McGrady asks a friend who is a manager at Trader Joe’s to coach them on how to get a job there. Bridgett and Bill never follow through. They also never write thank-you cards to the people who made donations, the one thing McGrady had asked them to do.

Eventually, it is clear that Bridgett and Bill are starting to feel caged in the house. They go back to their tent downtown, and McGrady is glad that she didn’t have to force the issue of them moving out.

But they call or drop in unexpectedly. Not knowing when they are coming starts to make her bubbly daughter Grace’s personality change: “She became afraid of shadows and light and the air without me in the room.”

McGrady explains to readers that her daughter’s newfound anxiety is the reason why she didn’t let Bridgett and Bill in when they showed up on the night that begins her memoir. And this results in Bridgett and Bill disappearing from their lives.

McGrady writes them an email to apologize and explain. When she decides to recount the story of the adoption, she sends a Facebook message to ask if they would participate. They respond that they would. She travels to Texas to see them, and finds them in a remote house without electricity or water.

The trip has moments that are challenging and unsettling. And moments that are mystical. At a store, McGrady, when asked why she is in town, tells the woman behind the counter that she is talking to her daughter’s birth parents for a book. The woman tells the story of giving up her son 30 years earlier, in the first open adoption in Texas.

McGrady interviews Bridgett and Bill for two days. On her last day with them, the plan was for Bridgett and Bill to make a music video for Grace. Instead, they sit McGrady down on the couch with a video recorder running, so they can tell her their full version of events. Ultimately, their experience as birth parents was terrible.

In the Afterword to her book, McGrady has warm words for her ex-husband and for the “good balance” in their parenting, even as she acknowledges that she still worries about his health and his drinking. Regarding Bridgett and Bill, she is uncertain what to write. She knows they are still angry. She hopes they can “change their fate and fortune.” She also hopes “they will be available for Grace should she ever need them.”

In Rock Needs River, McGrady has shared relationships she has participated in, and relationships she has witnessed. She is ceaselessly generous and courageous in giving voice and tone and texture to each of the main people in this story. This is a book about McGrady’s abiding devotion to her daughter, “the greatest love of my life,” and, as such, is a joyous journey to experience with her.