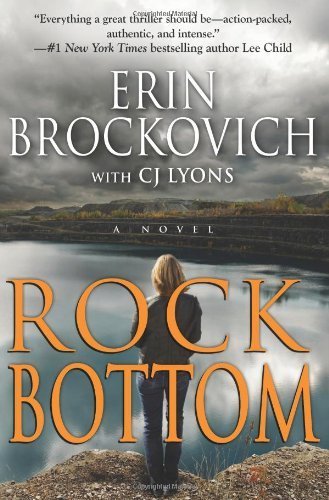 What can a reader say about a page-turner with laughably stock characters, a few unusual touches, and pedestrian prose—all written by a real-life hero?

Erin Brockovich, a struggling single mom, was working as a file clerk in a law office in California when she helped expose how a big corporation had been secretly leaking toxic chemicals into a small town’s water supply for over 30 years. Her story became the subject of an eponymous 2000 movie, and Julia Roberts won an Academy Award for best actress for portraying the title role.

So now Ms. Brockovich—with the help of C. J. Lyons, an emergency-room pediatrician and author of seven medical thrillers—has written the fictional sequel to her life story. Rock Bottom is a thriller about a struggling single mom who, after exposing how a big corporation had secretly polluted a neighborhood’s water supply etc., returns to her small West Virginia hometown to expose how a second big corporation is secretly poisoning the ground and water etc. Naturally, this Brockovich—here named A. J. Palladino (presumably, with a nod to the co-author’s initials)—has been the subject of a movie on the Lifetime TV network, portrayed as “a buxom, blond, bimbo, trailer-trash hillbilly.”

There’s no question that Ms. Brockovich and Ms. Lyons can keep a reader flipping pages. Even if it’s obvious where the journey will end, many of the twists and turns along the way are as jolting and dramatic as the winding Appalachian Mountain road that Palladino’s colleague is driving when a villain in a dark SUV tries to force her over a cliff. (Well, yes, sometimes the plot turns are clichés.)

The subplot about mountaintop-removal mining and wind farms adds a nice political touch. And the team of Yancey and the Free Earth Ladies are a unique bit of comic relief for a while, until the authors get too smarmy, too often, about how the group are probably just “coeds bent on saving the world while fast-tracking their acting and modeling careers.”

Ms. Brockovich and Lyons should have let the Ladies be, because they’re basically the only original characters in a Dickensian world of pure-evil villains and pure-good heroes, with equally Dickensian names. (The coal magnate whose family has controlled this mining town for generations is Mr. Masterson. Get it? Master of the town?) A. J.’s son, in fact, is straight out of A Christmas Carol, a spunky nine-year-old in a wheelchair (I am not making this up), while the faux-Brockovich heroine’s only flaws are that she can’t keep her mouth shut when she sees injustice and she’s too independent to take money from friends and family. Really. Oh, and she doesn’t want fame, only justice.

Aiding this dynamic duo are the chicken-frying, aphorism-spouting, Southern-twanging grandma (called Gram) and the big-city lady lawyer in “ankle-length shearling coat, designer suit and shoes” who must finish the crusade begun by her corporate-turned-populist lawyer-father who never paid much attention to her when she was a kid. (I am still not making this up.)

On the side of evil, the Masterson mining conglomerate is assisted by minions like Dickie Ellings, a “towering,” pot-bellied bully with “beady” eyes and a nose “littered with the broken blood vessels of a man who did more than enjoy his drink.” (Then what did he do with his drink?)

If all that’s not enough to make a reader gag, the grand finale manages to combine “The Perils of Pauline” with Dickens: A. J. chases the chief villain on a catwalk shakily suspended over a vast pool of toxic sludge as a thunderstorm rages, trying to prevent said villain from unleashing a flood of the sludge on the local school, while Ellings is trying to murder Tiny Tim.

Erin, don’t give up your day job. We need public-interest advocates much more than we need mass-market thrillers.