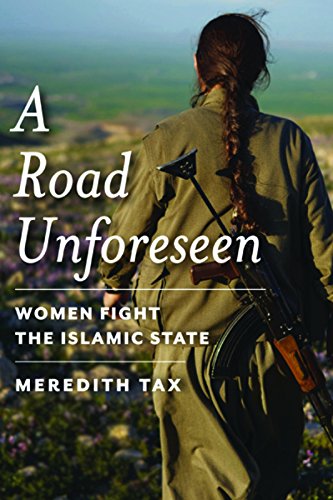 Meredith Tax is to be commended for her thorough and well-documented book about the history and politics of a region of the world most people know very little about. Readers interested in geopolitical issues and history will no doubt be grateful for her lucid explanation of events involving countries like Turkey, Syria, Iraq, and Iran and for illuminating the plight of the Kurdish people in the Middle East.

But those seeking a feminist focus on women’s role in the region’s past and current history and the voices of women who fight against the Islamic state are likely to be somewhat disappointed. Why, they may well ask, was the subtitle not A History of Fight[ing] the Islamic State?

Most of Tax’s work illuminates a complex political and military history that is enlightening. But it isn’t until Chapter Five, nearly half way through the book, that women really become prominent, and then only for that one chapter. They are, of course mentioned throughout, and some feminist historians and regional activists are quoted here and there. Feminist roles in social movements generally are referenced including the fact that “left-wing movements have been overwhelmingly led by men and served by women.”

However, the book relies heavily on the philosophy of Abdullah Ocalan, the ideological leader of the Kurdistan Workers’ Party, or PKK, which inspired attempts by Marxist, revolutionary male and female Kurdish rebels to establish the independent cantons of northern Syria known as Rojava. It is Ocalan’s story that frames the tale of these Kurdish rebels struggling for freedom, identity, autonomy, and equality.

To be fair, Tax does point out the critical role women have played in modern times. For example, secular women leaders were able to marginally influence the crafting of pro-women laws in Iraqi Kurdistan, although they continued to be subjected to horrific acts such as honor killings, forced or early marriages, marital rape, and FGM, forms of violence which remained the focus of women leaders.

But it is the revolutionary role Kurdish women played in fighting ISIS that shines in Chapter Five. Here we meet Sakine Cansiz, “the iconic PKK woman leader,” who fought “against male dominance and for Kurdish rights.” It was women like her, guerilla soldiers, who built an autonomous women’s army, 5,000 strong by 1997, and who formed the political Party of Free Women of Kurdistan.

In a rare grassroots voice of the movement quoted in this chapter, a young woman says, “I learned many things [in the women’s camp]. . . . Back home I never dared to speak up, especially not with men. [Here] we share all tasks equally. It is considered deeply shameful to wash another man’s socks, for example, and we all cook together.” More voices like that would have made the experience of these women fighters so much more compelling.

Tax says that she wrote this book “to answer [her own] questions about what kind of revolution was possible in the 21st century” and what would happen if “the Left ever put women at the center of its politics. How would a decision to focus so much on women . . . mesh with democracy?” These are intriguing questions. So is this one: “How strong is the position of women?” and “How much are women in leadership really listened to?”

Perhaps Tax’s book would have been decidedly more feminist if she had waited a while longer to write it and to let women themselves answer vital questions like these. Knowing how prolific a writer and committed feminist she is, maybe a sequel will follow.