Road Out of Winter: A Novel 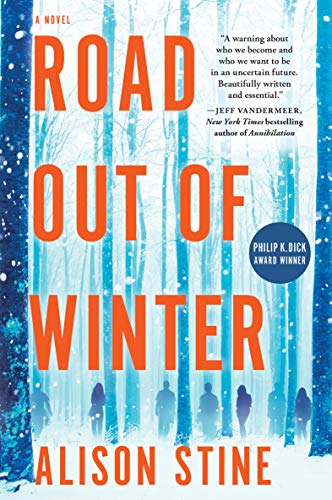 At the start of Alison Stine’s first novel, Road Out of Winter, the protagonist, a young woman named Wylodine (known as Wil) leaves her rural home in Ohio and sets out for California. As the title indicates, this is a road novel, though it could also be described as post-apocalyptic fiction, or without the grandiose vocabulary, what happens when civilization as we know it falls apart.

For Wylodine and her companions on the road, life goes on. In this instance, apocalypse doesn’t mean sudden dying and death, but rather going on, step by step, little by little with ingenuity and grit.

It takes a while for Road out of Winter to get going, but once it gets going there’s no stopping it, though the characters stop all along the way, and encounter gangs and tribes and families all trying to survive without malls, cell phones, banks, and law and order.

Wylodine carries a gun with her, albeit without bullets. Much more valuable are the seeds she has which will enable her to give birth to some kind of new arrangement, maybe even a civilization. She’s a valuable road warrior because she knows how to grow plants, including marijuana, which has provided her with the cash that helps her and her fellow wanders survive.

Wylodine has will power. She also has a strong sense of right and wrong. In a way, she’s too good to be believable, but readers, especially women, will enjoy Wylodine’s ability to survive and thrive, and to protect herself and her tribe by any means necessary. She’s a kind of redneck Wonder Woman.

Along the way she meets all sorts of characters who are finely drawn. They also seem like familiar types—the wounded hero, the survivalist, the teenage mother, the derelicts, and the utopians—only transported into a future world where they live on the edge.

An environmental activist named Dance, who has done some tree sitting has some of the best lines. “The whole world has gone to shit,” he says about halfway through the novel. Other characters also have intriguing lines. The injured traveler tells the teenage mother, “The world’s gone crazy.” She says “No” and adds, “It was always this way.” She seems to speak for the author herself who humanizes her imaginary post-apocalyptic world.

While Dance has the best spoken lines, Wil has the sharpest observations and insights, and, when the author gets into her head, the language becomes more vivid and more electric. The vehicle takes off.

The novel doesn’t offer big Orwellian insights about the world in the immediate future. And there’s nothing that approximates Huxley’s Brave New World. The characters drive the plot and create the drama.

Readers might want to find out if Wil makes it to California, which the characters imagine as a kind of paradise, though in Road Out of Winter it’s the journey itself not the destination that fuels the narrative.

With one published novel under her belt and a feather in her cap, one hopes that Stine has another tale or two up her sleeves.