The Road to Christmas: A Sweet Holiday Romance Novel 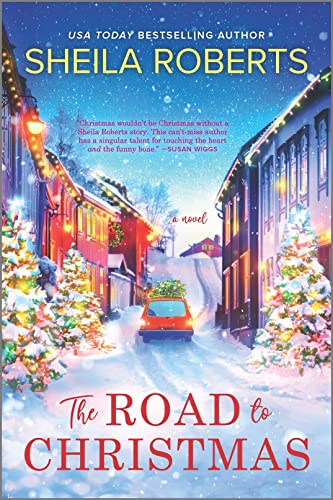 What happens when a marriage of 29 years is on the rocks? Michelle and Max Turnbull, parents to three wonderful daughters, have been happy for the first 25 years they've been together. But, when Max thinks they should try for another baby, and hopefully, a boy, Michelle is concerned. Being the mom of grown women, she knows her age is a detriment, but she loves Max, so she agrees. Thrilled when she learns she is pregnant, her heart breaks when she miscarries. Grief and anger set in, and Michelle builds a wall around herself, blaming Max for suggesting another child, and she is devastated about losing it.

Now, four years later, they barely speak and are talking divorce. When the family gathers for Thanksgiving at Michelle and Max's Washington home, they put on a good front, not wanting anyone to know their troubles. Their older daughters, Audrey and Shyla, detect animosity between them but don't know what to do. And Max's parents also notice things aren't right.

Shyla and Audrey discuss their parents hoping their marriage isn't over:

"Audrey shook her head. 'The way they kept dodging the subject, I don't know. I hope not. Twenty-nine years together down the drain.'

Audrey considers: "Except the last five of those had not been happy. Her parents had always seemed so strong, but losing that baby had undone them. Instead of growing closer, they'd fallen apart. They were a great inspiration for staying single."

Twenty-seven-year-old Audrey lives in Los Angeles, having moved there to be with her boyfriend Dennis, the man she thought was "the one." But after giving up everything to be near him, he dumps her, stating she drives him nuts because she is always spewing facts. Can she help that she is intelligent? What is it about guys who don't like smart women? So now, even though she is enjoying the holiday, she is brooding wondering if she'll ever find Mr. Right!

At 24, Shyla is lucky to have found someone she truly cares for and who feels the same about her. She has a job she loves in San Francisco designing costumes for the stage and shares an apartment with Milton, the guy she hopes will be presenting her with a ring soon.

Grandparents Warren and Hazel Turnbull who live in Oregon are spry senior citizens, though Milton has been having heart problems, which has them all worried. Yet he is stubborn and determines not to let anything bother him.

As they gather for the holiday feast, Max and Michelle put on a good show, trying to convey nothing is wrong, though Hazel and the girls sense the opposite. Another thing dampening the mood is the youngest daughter, Julia, who is not with them. Married and the mother of six-month-old Caroline, they reside in Idaho, and they didn't want to make the long trip to Washington while the baby is so young. They manage to Zoom to see each other and chat, and during their conversation, Julia invites everyone to her home for Christmas.

Warren is all for it, but Hazel is worried about his health. Audrey and Shyla think it's a great idea and of course, Max, who loves his daughters is overjoyed about the trip. Michelle cannot stand the thought of spending long hours in a car alone with Max, especially in the winter when they have to travel over the treacherous pass and may become stranded. But she'll be damned if everyone else goes, and she stays at home.

"What Michelle wanted she couldn't seem to reach. She wanted the happy marriage she'd enjoyed when the girls were small, but she couldn't get over the wall. In spite of the occasional moments of truce when it looked like maybe they were going to be okay, in spite of stubbornly continuing to live in the same house, the wall kept getting higher."

Shyla and Audrey drive together to Iowa and though Max wants his parents to ride with them, Warren is stubborn and wants to be alone with Hazel. Could he also be concerned about his son and daughter-in-law and hope with them being alone on the long ride they can work things out?

Michelle and Max begin their journey with a stony silence between them. As snow is falling, an eighteen-wheeler suddenly loses traction and almost careens into them. Max manages to swerve to avoid being hit, and his thoughts turn to his life with Michelle, hoping they can put the pieces back together and regain what they once had.

Meanwhile, Skyler and Audrey stop in Reno for some fun. But when their tire goes flat on a desert road, they wonder what to do since neither knows how to change a tire. As a truck drives up Skyler flags him down. He introduces himself as Russel Livingston and changes the tire for them. When Skyler notices him looking at Audrey she mentions this as they drive to town looking to find a hotel. Though she admits the guy is gorgeous, Audrey brushes it off seeing the sign on his truck that states he's in construction. Audrey is a snob and only into white-collar guys. But what has that gotten her in the past? Only heartache.

They find there is no lodging available, and they run into Russel getting gas. When he learns of their plight, he offers them to spend the night at his folk's ranch. Assuring them his parents are there, they decide to take up his offer. Vera and Tom Livingston welcome them with open arms and make them feel right at home. Matchmaker Shyla also thinks this gives Audrey and Russel a chance to become better acquainted.

Warren and Hazel stop for the night at a hotel, and she is annoyed because he forgot his heart medicine. She insists he contact his doctor to call in a prescription, but Warren believes he'll be fine. Unfortunately, the next day, the snow picks up along their drive and when a deer jumps in front of the car, it frightens them both, causing Warren's a-fib to act up. Hazel drives him to the nearest hospital where he is treated, and before long, they can be on their way.

As they all experience mishaps on their trip to Iowa, they arrive safely with stories to tell. The most unspoken consideration is the plight of Michelle and Max and what lies ahead in their future. Will they find their way back to the love they once shared?

Though written as a Christmas tale, the suspense, apprehension, and guilt contained in this narrative make for an interesting read any time of the year; however, the escapades of the travelers and the joining together of the family during Christmas add to the sentiment of the holiday.