The Riviera at War: World War II on the Côte d'Azur 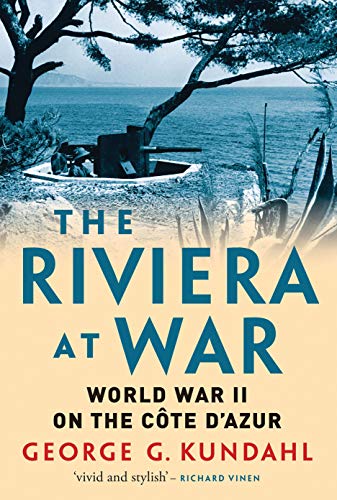 “should be the definitive volume on the Riviera’s World War II experience and is highly recommended.”

One particular aspect of World War II has gotten short shrift since the conflict and that is what happened in southern and southeastern France, the so-called Riviera or Côte D’Azur. Many do not realize that the war affected this part of France for five long years.

It endured Italy’s belated “invasion” in June, 1940, the vicissitudes of the Vichy state, takeover and occupation by each European Axis power, social disruption, deprivation, destruction, Allied invasion, and, finally, liberation and rebuilding.

What makes this volume desirable is that author George G. Kundahl has undertaken to tell the entire story of the war on the Riviera, including not only that mentioned above but also social, economic and political aspects and the efforts of the French (and even Italian) resistance movements to oppose their oppressors.

Kundahl is a retired U.S. Army general and former Federal government official with previous published writings, a PhD and a long-time resident of the French Riviera so he is well placed to write this story.

The chapter format of the book traces the events of the so-called Phony War, the establishment of the Vichy regime, each enemy occupation, the experience of the Jewish community, British efforts in southeastern France, the Resistance, the French and American landings in August 1944, combat in the mountainous area inland from the Riviera, the liberation of that area as well as the principality of Monaco, the final battle on French territory at war’s end and postwar rebuilding.

Chapters are further subdivided into sections which cover prominent figures, related events, German and Italian perspectives, and ongoing social, political, and economic conditions. Especially illuminating are the political conflicts between the resistant portion of the population with respect to the Vichy government and the differences of political opinion among the many resistance groups.

Fortunately, there is a list of abbreviations, and a necessity, at the front of the book which identifies, among other things, the many acronyms of these various resistance organizations and other groups and formations to reduce, if not eliminate, confusion on the part of the reader.

As a rule, most believe that the French Resistance was always united in its fight against the occupiers to relieve the homeland yet not everyone was on the same page politically. Many resistance organizations were established which generally mirrored their leader and members’ political beliefs, i.e. Gaullists, Communists, Republicans, and so on.

That these groups accomplished their mission of harassment, sabotage, intelligence gathering and occasional participation in conventional combat is a testament to the Allies’ deft handling of what was and could otherwise become a very sticky situation, particularly considering the necessity of white glove treatment of the prickly personality of General Charles De Gaulle, self-proclaimed leader of the Free French.

With the landings in Normandy getting most of the press, it is a highlight that its companion, Operation Dragoon, should finally receive its due. The strategy behind this second effort was to, hopefully, cut off German forces from Germany or, at the least, prevent them from reinforcing their armies in Normandy.

The author has described the preparations leading up to the invasion of southern France, the respective efforts of the individual Allied armies (yes, there was a participating French army as part of the U.S. 6th Army Group) and the fighting that occurred between these contending forces.

Interestingly, unknown to most, fighting continued to take place in the lower Alps along the Italian border into April, 1945. Mostly patrolling and artillery duels, nonetheless it contributed to the misery, casualties, death, and destruction endured by the respective armed forces as well as civilians.

Postwar, there was rebuilding and what the French called épuration or purification to punish traitors and collaborators, both with Vichy and the Germans. Everyone from women who took German lovers, to informers and political figures (such as Maréchal Phillipe Pétain of Vichy) to Germans who committed atrocities were targeted.

Covering all the bases, this is a well-researched and written account of the Riviera theatre of operations. The bibliography is extensive and the author has a commanding knowledge of his subject. The photo section has many relevant, and more than likely not previously seen, shots of the people and places referenced in the text.

A necessarily thick tome, this should be the definitive volume on the Riviera’s World War II experience and is highly recommended.