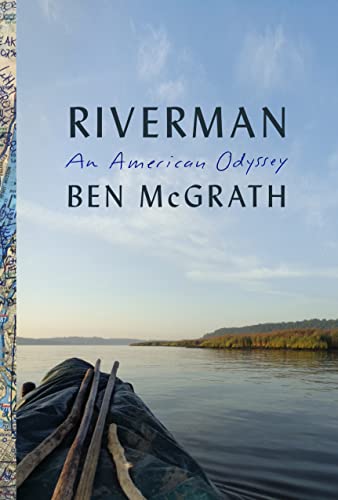 Ben McGrath has a journalist's nose for news and telling details and a novelist's ability to tell a suspenseful story with vivid portraits of ordinary people such as Richard Conant, who did extraordinary things.

In Riverman: An American Odyssey, his first book, McGrath traces the eccentric (to say the least) trajectory of a master canoeist who disappeared more than a decade ago and hasn't been seen or heard from since.

There’s a Wikipedia page for James B. Conant but none for Richard Conant.

He is presumably dead, though McGrath does his best to bring him back to life in Riverman, which is an expansion and an elaboration of his article about Conant that was published in The New Yorker and that attracted widespread attention.

Conant didn’t invent the word riverman, but his book will likely popularize it.

Is it an improvement on his article in The New Yorker? That's the big question. Not everyone will answer it in exactly the same way. Canoeists, rafters, and wanderers—(think of Cheryl Strayed, the author of  the bestseller, Wild: From Lost to Found on the Pacific Crest Trail)—will probably think the book is richer and deeper than the article. Those who like to stay at home and experience adventures vicariously will probably agree.

Still, Riverman feels padded too often. Tributaries take the reader away from the main current. The narrative slows down and loses its rhythm and drive.

Still, McGrath is right on target when he says that Conant, is “a man who craves friendship, and can’t seem to sustain it.” In that sense he’s a kind of Everyman.

In the epilogue to the book, McGrath says that he aimed to make Conant a hero, though he could also be seen as an anti-hero. McGrath also tries to make Conant into a figure much larger than life.

The subtitle of the book, An American Odyssey, invites comparisons with Homer's epic. Also, McGrath writes that Conant had "Falstaffian appetites."

The author suggests that readers compare his modern day riverman to Huck Finn, who navigated the Mississippi, and also to Lewis and Clark who explored much of the West on foot and by canoe, sometimes led by an Indian woman named Sacagawea.

"The American river canon can be understood as a play in three acts," McGrath writes. "It begins with Lewis and Clark." Those two men were indeed intrepid explorers and pioneers.

Still, McGrath seems to forget that "canoe" is a Native American word, that Indians built beautiful, seaworthy vessels and traveled with them long before the arrival of Merriwether Lewis and William Clark, who went mad during his trek to the Pacific and back, and took his own life.

As McGrath knows, there's something dark and fatalistic about men—it’s men who dominate the genre—who want and do leave the middle class and middle of the road American life and venture into the unknown, risking their own safety and their own lives.

Christopher McCandless was one of them. Jon Krauker tells his harrowing story in a nonfiction narrative titled Into the Wild, a play on Jack London's novel, The Call of the Wild. Krauker’s book was made into a movie with Sean Penn.

Like London, McCandless, and many others, Conant heard the call, abandoned his old life and traveled thousands of miles by canoe, coming up from rivers for supplies and to rub shoulders with his fellow human beings, most of whom seem to have liked him despite his "paranoia," as McGrath labels it.

In the canoe canon there's also Deliverance, James Dickey's harrowing Southern Gothic novel that was made into a nail-biting movie.

Riverman would make an entertaining movie in which the reporter, Ben McGrath, gathers clues and evidence about Conan and his disappearance, and interviews witnesses in order to solve the mysteries.

"Playing the detective," as he calls it, McGrath describes where his hero—or anti-hero—goes and what he does, in the manner of a cop or a private investigator.

A feature film, rather than a documentary, would create more drama and tension than McGrath generates. The movie would end with the reporter taking on the identity of the riverman. That’s what often happens with biographers, as Freud pointed out.

McGrath doesn't spell out all the details, but he writes that "Like Conant, so often would, I departed town at first light, having hardly dozed."

Some of the author's diversions are intriguing, as when he calls water "not merely a conveyance, but an equalizer."

Is there a unifying theme here? Probably so, though McGrath isn't writing a thesis and doesn't hammer away at his ideas. If there is a theme, it's probably what McGrath calls "escapism." But whether Conant was or wasn't an escapist isn't clear.

He might have been running from something or running toward something.

Avoidance might have been his way of operating in the world, but like Henry David Thoreau, the author of Walden and a versatile "riverman" he might want to confront the very essence of existence itself.

Thoreau's A Week on the Concord and Merrimack Rivers is a masterpiece about two New England waterways.

If you read Riverman, don't expect all the loose ends to be tied up neatly. Quite the contrary, the mysteries continue. You might as well enjoy them when you can.