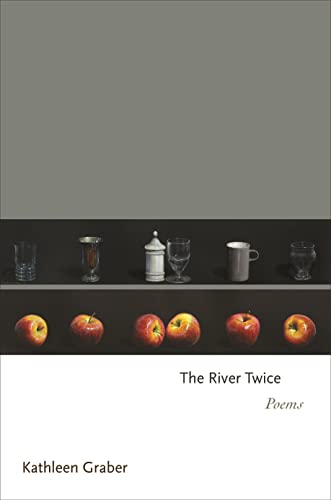 “Graber’s great achievement in this masterful collection is that though we never feel the same life flowing twice through any one of her poems, we profoundly feel the myriad ways we are connected to life.”

“You cannot step twice into the same river, for other waters are continually flowing on.”
—Heraclitus

Kathleen Graber doesn’t write books often, or rather she is slow to produce them. So a book by her is a big event. The Eternal City (2010), her previous book, was a finalist for both the National Book Award and the National Book Critics Circle Award. That book took on what it means to possess and be possessed by objects and technology.

Her new book, The River Twice, again takes on big ideas, this time about what it means to live in a constantly shifting, 21st century America. Graber’s poems beautifully reimagine Heraclitus’ river until time is not the only thing that is fluid—language, desire, dreams, even our relationships to each other and the world all shift and change with a dizzying speed.

The opening poem “Self Portrait with No Internal Navigation” begins: “Have you ever been arrested?” The play on “arrested” sets the stage as we quickly realize how difficult it is to fix our attention on anything for long in Graber’s mercurial landscape. The poem flies back and forth from the pigeon that first “arrests” her gaze to the French high wire performer Philippe Petit, to the narrator’s husband, in the end leaving us breathless as we contemplate the tightrope between living and pain, between beauty and what is broken.

The second poem, “The Weight,” examines what it means to live a life of devotion, or rather, the notion that the act of living is a devotion. She shifts rapidly from reading Knausgaard, to acupuncture, to a garage sale, to the death of her father. In doing so, she presents for us the picture of a life that exists between things, “between belief in the sacred & my disbelief in the divine,” or between the tips of the acupuncturist’s fingers and her own: “He touches the tips/ of his fingers to my fingers to see if they have warmed.” What slowly emerges from Graber’s careful meditations is the fact that we can’t escape the rapidly shifting life around us precisely because it is our desire and longing that propels that life. The ghost of her father lies behind every line, as if urging each moment, each image toward metamorphosis: “I rarely think/ of any of this, just as I don’t think of my father existing anywhere/ anymore, other than inside the heads of the few of us left who can still/ recall him.”

The strength of Graber’s collection is the way in which she seamlessly shifts her gaze from inward to outward, specifically to what has become of the U.S. The series of poems each titled “America” are the standouts in a stunning collection, and through them, we understand that our ideas of America, too, are always changing, never existing in the same place twice. The America of today not the America of yesterday. My America not the same as yours.

In “America (Peaches)” Graber succinctly paints a portrait of American righteousness, of a country split into sides each condemning the other. She escapes that same righteousness by portraying herself as both flawed and holy:

“America, I know I could do better by you,

though I stoop conscientiously three times a day

to pick up my dog’s waste from the grass

with black biodegradable bags. And lest you suspect

that this is more pretension than allegiance, know

my dog was the one at the shelter no one else

“America (Flight)” moves deftly between the story of a cat lost in one city in Florida only to find its way back to its owners in another city and an airline flight where the narrator has to turn back from a blizzard:

“But there was no red alert

from the airline in the inbox above the forwarded story

of a tortoiseshell cat in Florida which had found its way

two hundred miles home. America, because we would like

to know where we are going & what we will find.”

In Graber’s poems, we don’t always get to know where we’re going. We don’t even always get warnings that the destination has changed. In the end, though, she reminds us of our deep desire for connection, both as the primary force behind change and as anchor in a universe that often feels like a hurricane tearing us apart:

“Who would not feel frightened on a burning

Planet? In a radioactive sea? It’s not faith or loyalty. Only fact.

We are small & afield. Give me your hand in the dark.”

It is, in fact, Graber’s protean ability to move between intellect and heart, between outer and inner landscapes that makes the collection work so well. As if in counterbalance to her “America” we are given a series of “Self-Portrait” poems, in which we see how the self is its own river, as here in “Self-Portrait with No Shadow”:

“I tried to slip away. The minutes were a fun house,

invisible walls against which I banged my nose.

The truth is my shadow will go on living forever

on that island no one can find, the island I am too

sad to visit. Each day it puts on all of the coats

I left behind, one atop the other, turns the collar up

On occasion, the constant shifts can feel forced or distracting as in “Greetings from Wildwood or Thinking of James Wright & Everything Else in the World” where the sudden turn from the collapse of a friend’s 18-year marriage to the comic book character Swamp Thing feels a bit too cute for its own good, but thankfully these missteps are very rare indeed. More often than not, the reader celebrates the cumulative effect of how the flow within each poem and from poem to poem washes over us not so we drown but so we see and feel how fluidity is just another name for connection, as in the poem, “Here, After”:

“When she was walking this morning, a pair of martins

darted from a tree & swept past her ears, one on each side,

so that she thought maybe the marriage had been like that,

two sets of wings, the color of twilight, on either side

but also unreal, even though the lake has somehow held

It is Graber’s uncanny ability to uncover the fresh metaphor and mine it to reveal all the implications of the river of desire moving through us and around us. Yes, the martins that fly past the narrator’s ear serve as metaphor for the end of a marriage, but they also connect the narrator to the present moment. The lake that holds “a picture of the sky” signifies both separateness and unity. Graber’s great achievement in this masterful collection is that though we never feel the same life flowing twice through any one of her poems, we profoundly feel the myriad ways we are connected to life.