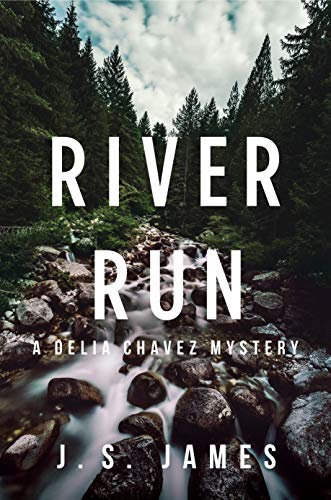 “J. S. James, a native of Oregon, very familiar with hunting, fishing, and the Willamette River, brings his expertise and familiarity to create a picture of the river so vivid one can almost see and smell it.”

A debut mystery heavy on the setting and featuring a feisty deputy sheriff in the person of Delia Chavez, River Run is sure to please fans of regional mysteries with a faint touch of romance.

Deputy Sheriff Delia Chavez is determined to make detective, and the deaths of Willard and Rose Gatlin just might be her ticket to advancement.

Sheriff’s Deputy Castner decided the case was clearly a murder/suicide, but then “Cast Iron Castner figured his tough-as-nails act had earned him his nickname, not the super hard lump between his ears.”

Delia doubts Castner’s conclusion, and when she finds a blade covered in blood, plus a half-finished note to someone named Robbie, she is certain. Willard Gatlin may have been shot, but a lot of knife work had been done on the victim first.

Senior Detective Harvey Schenkel agrees with Delia, but Sheriff Gus Grice, a  corrupt scumbag of the first order, fond of padding his expense account and dipping into the department slush fund, is unhappy with Harvey’s and Delia’s conclusion.

Delia walks on thin ice as Sheriff Grice is looking for any excuse to fire her. Delia’s two officer-involved shootings seem to give him that excuse, but he is outvoted on each Board of Inquiry. Both victims were child molesters, but Delia feels both shootings were justified, and that her intense hatred of anyone who harms children didn’t influence her decision to fire her weapon.

There are no leads on the Gatlin case, but too many other incidents are occurring to worry about it. First Harvey’s boat trailer and pickup accidently roll over him, putting him in the hospital and Delia as Acting Chief Detective. Fingerprints on the gear shift of Harvey’s pickup prove the brake failure is not an accident.

Almost before Delia can draw breath a decomposing body is pulled from the Willamette River. A sharp object has pierced the victim’s throat, and his index finger has been severed.

Then Charlie Lukovsky, a former detective in the sheriff’s department who Delia replaces when he resigns, disappears on the Willamette River while duck hunting with his brother Zack.

When his body is found it also shows a wound to the throat and a missing index finger. Someone out there is killing people and taking trophies. Is it one of the anti-hunting protestors, some with a penchant for violence, who have decided to do a little hunting of their own.

At the same time Sheriff Grice is acting secretively and suspiciously—more so than usual. Who from the Navy is Grice talking to, and why does he want a priority put on finding the mysterious man who uses a military-grade inflatable with a python painted on the side?

Whatever Grice is doing now, it is interfering with Delia’s murder investigation. Whatever it is Delia is certain Grice’s actions corrupt at best. She never thinks Grice is a danger to her, and she learns almost too late.

River Run is as full of colorful, eccentric, and realistic characters as the Willamette is full of fish and covered with fowl.

Delia Chevez, haunted by the abduction by a man in a boat of her little brother when she was five years old, also has a another handicap for a cop in the Willamette River Valley: “Truth be told, she wouldn’t drive across a Willamette River bridge if she could get around it.”

“Her thing had a name. Potamophobia: fear of rivers or running water. She knew exactly what she had, even studied it in college. Knew by heart the numbo jumbo for fighting it: Face fear head on . . . She’d found a simpler way. Avoid rivers altogether.”

Another wonderful, eccentric character is Annie Cox, dispatcher for the Sheriff’s Department, and Delia’s partner in figuring out ways to thwart Sheriff Grice.

“Annie is old school. None of that ‘Help me, I’m being sexually harassed’ garbage. The love exploits of his saucy-mouthed dispatcher were legend, and legend held she wasn’t all that choosy.”

Jealousy and racial prejudice are behind Sheriff Gus Grice’s hatred for Delia. “It galled him to pull her off administrative leave when he really wanted to knock the pegs out from under that smartass. Her and her uppity criminal justice degree.”

Then there is Jerzy Matusik, ex-Coast Guard search-and-rescue, now a dive instructor, who is hired by Grice to help on Delia’s investigation. Drop-dead gorgeous according to Annie Cox: “Pinch me blue eyes, sandy blond hair. Pair of shoulders filling your office doorway.”

Overshadowing all is the Willamette River: close to flood stage, with strong currents, filled with dead trees and every other kind of obstacle to make a dangerous river even more dangerous.

J. S. James, a native of Oregon, very familiar with hunting, fishing, and the Willamette River, brings his expertise and familiarity to create a picture of the river so vivid one can almost see and smell it.

Delia, Annie, Jerzy, as well as the sleazy Sheriff Grice are characters one longs to know better, but the plot could be stronger, with more foreshadowing of the killer.

All in all, James and his Delia Chavez series is a welcome addition to catalog of regional mysteries. Fans will be looking forward to Delia’s next cases.