A River Runs Again: India's Natural World in Crisis, from the Barren Cliffs of Rajasthan to the Farmlands of Karnataka 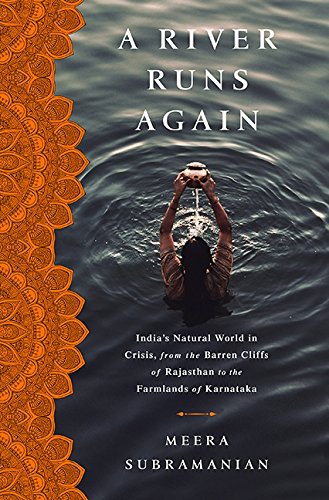 Meera Subramanian, in her book A River Runs Again, poses the problem of the state of India’s ecology and its decline since the 1950s and the Green Revolution. She opens her introduction with a poem:

“Life,
When elements become ordered, that’s all.
Death,
But a moment when into chaos they fall.”

This simple poem captures the essence of her story, as she selects a lyrical means to introduce the reader to the problem, its history, and events both positive and negative.

She has produced five chapters in which she uses these elements to give life to India’s ecological problems. Earth, Water, Fire, Air, and Ether—Subramanian shows how each of these elements does not stand alone, but requires the support of the others in order to give life and yet how death arrives through the chaos when they fall. And she uses this poem to divine a means to resolving the chaos and restoring life. She uses a fine thread, indeed, to weave this web.

Each chapter of the book is steeped in minute details about how India arrived at its problem. The first chapter, Earth, discusses the introduction of chemicals during the Green Revolution, and the subsequent knowledge gained worldwide about the destructive results caused by these chemicals to humans.

Although this is a tough subject to tackle, with its huge implications not only for India, but for the world as well, Subramanian’s writing brings a positive approach to India’s problems. As she indicates in the first chapter, “Across India, there is a burgeoning grassroots movement to lighten the heavy use of pesticides and other agrochemicals that began forty years ago . . . it is the breadbasket of Punjab that will chart India’s course and it is there that some farmers are beginning to set the petrochemicals of the Green Revolution aside, transitioning to natural farming practices . . .”

Subramanian treats each chapter in the same manner. She introduces the element and how it relates to India’s ecology, and how each element relates to each of the other chapters. It is a story that is enlightening in its various forms—solid research based in details as well as anecdotal tales from those who are striving to make the changes needed.

Throughout this book, Subramanian takes us on a true journey of learning and she does it in a quiet, thorough, and knowledgeable manner. She educates us on the evolution of the problem and finally, through small narratives of those she met along the way—everyday farmers, wives, volunteer workers, and government employees, we learn of how they have embraced the progressive ideas as ways to save India’s ecology.

In chapter two, Water, she takes us back to the problem of moving India forward to a healthier, more productive country, as she describes the water bodies of India as being “under assault, dying from overuse and exhaustion.” Again, she brings a variety of caring people into the picture—people who recognize that this element is only a piece of the puzzle, and yet must be addressed.

Her history of India goes back once again to the Green Revolution and its affect on the nation as a whole. And again, through examples of misuse and abuse of the ecology of the country, Subramanian brings us forward to the options that are surfacing to bring purity back to the water and subsequently back to the people with its life-giving properties through efforts like reforestation as a means to capture water. The key is that people are beginning to realize that they can make a difference, and question how they can bring that difference about.

In chapter three, Fire, Subramanian considers the impact of cook stoves that burn biomass on a daily basis, and that in India “more than two-thirds of the population still rely on carbon-based fuel for their primary energy source.” The impact of emissions from these stoves is directly related to over four million premature deaths.

While moving away from biomass stoves is certainly the desire, it is easier said than done. Again, to make her point, Subramanian introduces a variety of individuals and the pressures they face on a daily basis. Awareness of the dangers of these cook stoves dates back to 1959, and yet little or no progress has been made toward moving away from them. The dangers of this problem go beyond the individual’s health, and contribute to the global problem of climate change across the world.

But as with her previous chapters, Subramanian ends on an encouraging note. While the answer has not been reached, the many people she spoke with recognize the need for changes in the types of cook stoves that are used by the vast numbers of Indians, and there is promise for a better future.

As with her previous chapters, Chapter 4, Air, is promising. Identify the problem, enlighten about the history that brought it forward, and share the options to, if not eliminate, at least improve upon it. This chapter starts on a discussion that most would think curious—the near extinction of vultures in India. She goes into detail about the varieties of vultures, their mating and reproductive processes, and their importance to the ecology of India. Again, the chapter ends on a positive note—the realization that even vultures are important to the overarching life cycle, and breeding centers look for positive outcomes and reversals to extinction.

In chapter five, Ether, Subramanian deals with one of the most difficult problems facing India, although many do not see it as a problem. It is the question of what it means to be a young woman in today’s India. How does this relate to the other topics discussed regarding ecology and economy in India? Simply put, “This rapid rise in population impacts every aspect of life from availability of food and water to job opportunities.” In many areas, Indian women face “. . . physical and sexual violence, quality of health services, level of political expression, and access to property and land rights.”

Subramanian takes this opportunity to educate the reader about India’s glorious past yet also how certain areas stagnated and crippled its population. Here she talks about an organization named “Pathfinder International” whose focus is on educating the poor on reproductive health. Its mission is to “. . . encourage women to delay marriage and space the timing of their children . . .” It is a modest goal, but still a challenge.

This is a particularly hard chapter to read. Change is slow, acceptance of change even slower. But Subramanian once again, puts a positive spin on the issue of attitude change and how it can affect India.

A River Runs Again tackles a huge issue, one of personal importance for Subramanian, while at the same time recognizing the importance of positive results for all Indians.  In her conclusion, she talks about hope—not as a noun, but as a verb, an ongoing, continuing activity reaching for positive results. She talks about the future as not bleak, but as promising, and one can only hope that in ten years she will write another book about India’s return to a glorious country.