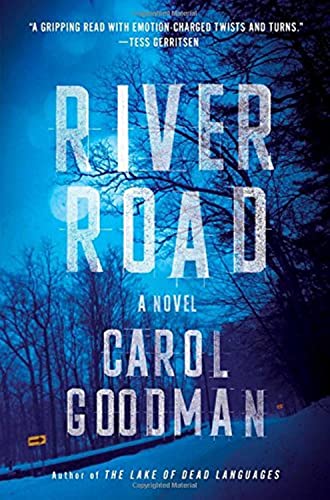 “With a fast-paced story and surprise ending, River Road is a destination you’ll surely want to take.”

Carol Goodman is the critically acclaimed author of 14 novels, including The Lake of Dead Languages and The Seduction of Water, which won the 2003 Hammett Prize.

In River Road, Professor Nan Lewis and her husband are no longer together after their only child, Emmy, was killed by a drunken hit and run driver. Lewis’s agony and grief are such that her only way of dealing with them is to turn to alcohol—lots of it. Unfortunately, her drinking affects her professional life at the college where she teaches creative writing. Many of her colleagues and some students realize Lewis has a problem, but Lewis is in denial thinking that if she can function at work it means she’s just fine. A bad sign.

One night at a faculty party, one in which Lewis learns she has been denied tenure, she hits a deer on snow packed River Road while on her way home from the event. Coincidentally, the spot of the accident was the same location where her four-year-old daughter Emmy had been killed. Infused with several glasses of wine she gets out of her car to look for the deer, thinking that she may have only hurt it rather than killed it. She never finds the animal. The snow is so deep in the driveway leading to her house that she decides to leave her car parked at the bottom of the road and walk up to her house.

As a result, she’s awakened the next morning by the local police who inform her that one of her students was killed by a hit and run driver on River Road. Moreover, because of the damage to Lewis’s car, she is a suspect in the victim’s death that turns out to be one of her most gifted students, Leia Dawson.

Soon afterward, the town gets wind of Lewis’s involvement and turns against her. This ubiquitous scorn causes Lewis to drink even more, but also compels her to investigate what really happened the night Leia was killed. Was she really to blame, or was someone trying to frame her?

The author creates a dynamic novel by using suspense and unforeseen plot twists. Her characters are interesting and well developed, bringing intrigue and excitement to a frighteningly real life story that could easily be an actual event. The Achilles heel of the protagonist, her alcoholism, is painfully realistic and shows how the disease slowly progresses, pulling people to the bottom of an inescapable bottle.

With a fast-paced story and surprise ending, River Road is a destination you’ll surely want to take.