The Rise of the G.I. Army, 1940–1941: The Forgotten Story of How America Forged a Powerful Army Before Pearl Harbor 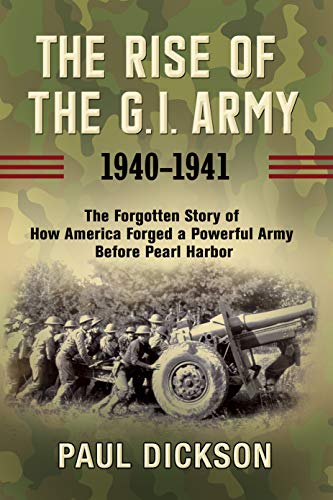 “examines those critical 27 months and the key decisions that allowed the U.S. to begin the long road to becoming the ‘Arsenal of Democracy’ . . .”

When Germany invaded Poland in 1939, to call the United States Army third-rate would have been kind. Suffering from budget parsimony caused by the Great Depression and a general disillusionment and isolationist sentiment of the American people, the U.S. Army was undermanned, unequipped, and unsuited for the new style of high-intensity mechanized warfare unleashed on Europe by Nazi Germany.

In this new book, the author examines those critical 27 months and the key decisions that allowed the U.S. to begin the long road to becoming the “Arsenal of Democracy” and creating the military might that would enable the Allied powers to liberate Europe and the Pacific.

Of course, the key figure in the book is General George C. Marshall, who becomes the Army Chief of Staff on the day Hitler’s panzers roll into Poland. Quickly recognizing the U.S. would likely get drawn into what was now truly a global conflict for which the Army was not prepared, Marshall becomes deeply involved with overcoming significant resistance in the War Department, Congress, and the American public at large to build up the neglected armed forces.

The author develops an interesting back story to America’s wartime Army, noting the role of Roosevelts Civilian Conservation Corps (CCC), a key component of his New Deal to provide jobs for unemployed young men by planting trees and  building roads and bridges in wilderness areas, in developing the leadership skills and team work that would be used by this new Army. The Army provided much of the leadership for this CCC, becoming almost an adjunct to the New Deal, and the ability of so many young men to receive medical and dental care in these camps, as well as a square meal, was crucial in their later transition to military life. The logistical challenges of running these camps also provided valuable training to the captains and majors that would become the colonels and generals in the war time Army.

The author also covers the highly controversial topics of the nation’s first peacetime draft, and the struggles of creating a national Army in the era of segregation. The draft was not entirely popular, seen by many isolationists as the first step to creating an Army to be used in the ensuing global conflict. They were right, of course, yet the wisdom of both Marshall and Roosevelt in not only creating but keeping the nation’s first 1,000,000-man conscript Army in being by a very close Congressional vote become self-evident on December 7, 1941.

The issue of segregation remained undecided before the war. Although many African Americans were eager to sign up for the draft and enlist, the Army refused to not only create integrated units, but open up combat roles for these eager Americans, including in the rapidly expanding Army Air Corps. It was only after multiple demands by groups such as the NAACP that the Army took the first step to forming what would become the Tuskegee Airmen or the first all-Black infantry divisions.

The capstone narrative covers the realistic training this new conscript Army undergoes in 1941, culminating in a series of exercises referred to as the “Louisiana and Carolina Maneuvers” by historians, that not only tested new concepts of armored and mechanized warfare, but provided Marshall with a practical exercise to weed out senior officers he considered unfit for the demands of warfare being observed in Europe. A new generation of officers, including George Patton, Dwight Eisenhower, and Mark Clark emerged from these exercises as the crop of leaders Marshall would soon place in command of America’s war effort.

The author focuses on the political and social aspect of how this Army was formed and avoids some of the more critical strategic and doctrinal issues during this period, even though these would have enormous ramifications once the war started. Although there is a bit of discussion on Marshall’s role in changing the “square” division of four regiments into the “triangular” division of three regiments, the larger debate on how many divisions the Army thought they would need to win the anticipated world war is somewhat lacking.

In spite of forming the largest Army in American history, US ground forces were eventually capped at 91 divisions as the Army underwent a huge debate over the role of airpower, particularly strategic bombing. The enormous manpower requirements to build up what would become the Army Air Force had serious effects later in the war when infantry replacements became scarce in late 1944 and the Army was forced to redirect many of those personnel intended for the bomber fleets to become infantry replacements.

The author also only briefly touches on the Army’s armor doctrine and the debate over the role of tanks versus tank destroyers that left the Army with a poor combination of tank technology and doctrine to face Hitler’s panzers, forcing a lot of painful lessons and casualties the first time the Army faced the Germans in 1943.

It now seems inevitable that the U.S. would win World War II, but in 1939, this was far from likely. Only the decisive action by statemen such as George Marshall enabled the Army to awaken from its interwar hibernation and begin the long road to becoming the mightiest Army in American history. This book tells this amazing and improbable journey with all the near disasters, hard choices, and missteps that had to be overcome to get the military prepared for that fateful Sunday morning in December 1941.