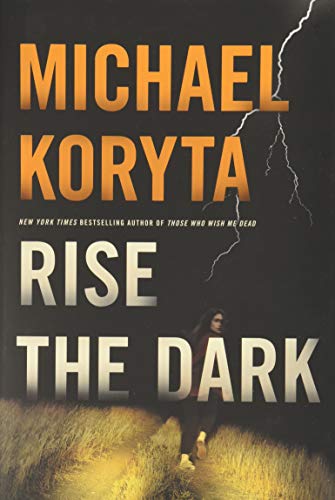 There’s a strange little boy who appears twice in Michael Koryta’s Rise the Dark. He’s about seven years old, with skin that’s far too pale for the intense sunlight in the odd little Florida village where he lives. He’s being paid by a psychic to harvest oranges from a tree in her front yard, and talks freely about the spirits of dead people who regularly speak their minds to them.

The little boy may or may not have come across Lauren Novak, a woman who was murdered near that village about two years ago, but chances are he has an ethereal connection to one of the woman’s in-laws, one of whom is now engaged in a scheme to take down most of the nation’s electrical grid.

These are just a few of the undercurrents fueling the mysteries of this masterful thriller, a sequel to Last Words, and Koryta’s best book since Those Who Wish Me Dead. Gripping from the first page to the last, its narrative captures the challenges faced by two men: Markus Novak, who’s determined to bring down the psychopath who killed Lauren; and electrical linesman Jay Baldwin, who’s told his wife will die if he doesn’t send the western half of the United States into a destructive darkness.

A movie trailer might tease this story with high-concept descriptions of good men and women trying to outwit a charismatic madman. It would tap our completely reasonable fear that there are a range of domestic terror sleeper cells just waiting for the call to destroy the nation from within. It would feature explosions that leave human bodies blackened and smoking, and satellite images of the United States going dark as if they’re being taken from inside a madman’s mind.

As a novel, however, Rise the Dark is more aptly described as a story about men who will do anything to save the lives or avenge the deaths of women they love. And women who are every bit as tough as the men trying to save them. And good people who are genetically wired to sacrifice themselves to protect the security of millions.

All of this enables this story to succeed as a brisk, character-driven thriller. Yet its wonderfully dreamlike appeal is driven by the paranormal dimension that guides and protects Markus Novak, who for years has viewed his estranged mother as a fake psychic, and dealt with the shame of being raised by petty criminals.

Yet now, in the most terrifying moments of his life, Markus realizes that nothing about his mother was as it seemed. He also knows the voices in his mind are worth listening to even if he doesn’t want to acknowledge the truth about the metaphysical dimension’s impact on his life.

Fortunately, Koryta, who has a deep appreciation for the vast stretches of the American West, does recognize the power of this dimension. He uses it to chilling and charming detail in the matter-of-fact statements from that strange little boy picking oranges at the story’s beginning, and in Novak’s awakening to its power in the end.

By that point it’s clear that the best of all possible outcomes are probably too much to hope for because the darkness is still rising, promising even more malevolence for Markus and the nation in the next edition of this astounding series.