Rise Up: Confronting a Country at the Crossroads 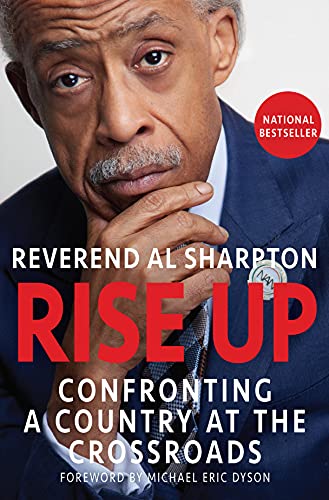 According to Wikipedia, the Reverend Al Sharpton preached his first sermon at the age of four. By the time he was ten he was ordained a Pentecostal minister and was known as the “boy preacher.” Later, he reinvented himself as a Baptist.

Not surprisingly, the church has been his spiritual home for most of his life, though he has never been far removed from gritty urban streets, especially those of New York City where he has exposed racism time and time again, and gone to the aid of young Black men, long before the advent of the Black Lives Matter movement.

In Rise Up, his fourth book, Sharpton drops a lot of names, though he is much more than simply a name dropper. Elizabeth Warren shows up in these pages as “Liz,” Pete Buttigieg is “Pete,” Aretha Franklin is “Aretha,” and Coretta Scott King is “Coretta.” Shirley Chisholm appears as “Mrs. C.” while Al Gore is simply “Gore.”

Sharpton seems to have known everyone in the world of politics and in the entertainment industry, and while he has never been elected to public office, or been a headliner in Las Vegas, he is both a consummate politician and an accomplished entertainer.

He knows how to make headlines and hold the attention of an audience.

If he seems to have known everyone worth knowing, he also appears to have affiliated himself with every major radical and progressive cause in America over the past fifty-years, from civil rights to gay rights and more.

In Rise Up, Sharpton presents himself as an environmentalist who greatly admires Greta Thunberg, the teenage Swedish activist who has called for immediate action around climate change and global warming.

“I’ve never met Thunberg personally,” Sharpton writes. “But I recognize the fire in her belly.”

Rise Up is mostly about causes, political movements and political ideas with a personal touch.

Sharpton spices up his vivid accounts of Bill Clinton, Barack Obama, and Donald Trump—who used him for his own advancement—with tales of his life growing up in a single-parent home, and early on adopting as his role models, James Brown, Jesse Jackson, and others.

Some of the stories in this book are compelling, especially the author’s account of a meeting with Coretta Scott King, who advised him to tone down his rhetoric, “otherwise, you could win the crowd, but lose the crown.” Touché.

Sharpton seems to have followed Mrs. King’s suggestion. He still has fire in his own belly, but his language is less explosive than it was, say, in the 1980s when he led marchers through Bensonhurst, Queens, after white kids killed 16-year-old Yusef Hawkins, simply because he was on their turf.

Near the end of this book, Sharpton offers helpful suggestions to readers about how they might rise up. “Use the media,” he writes. “Be comfortable with confrontation.” What he doesn’t and probably can't do is show young activists how they might copy the Reverend Al Sharpton.

As Michael Eric Dyson rightly points out in the Foreword “There has never been anyone quite like Al Sharpton on the American scene.” Dyson might have added, “and never will be.”