Rise!: From Caged Bird to Poet of the People, Maya Angelou 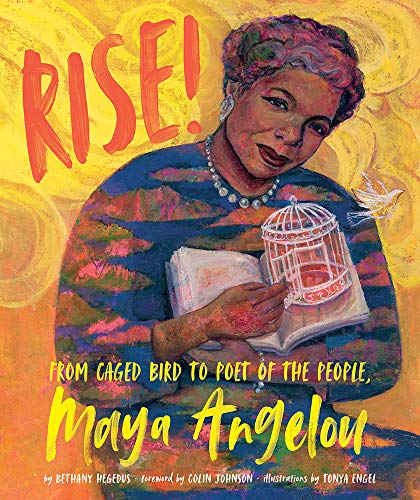 "With Rise! Hegedus has elevated the craft of writing, as well as the bar, for all fellow picture book biographers."

In Rise! From Caged Bird to Poet of the People Bethany Hegedus showcases the life of Dr. Maya Angelou, a woman of wisdom, grace, and dignity, and a true national treasure. The reader gets a glimpse of Angelou in her many roles and how she changed the world as poet, performer, writer, activist, humanitarian, mother, and phenomenal woman.

The story of Rise! also syncs with the 50th anniversary of Angelou’s classic book I Know Why the Caged Bird Sings, where Angelou boldly confronts her life’s challenges. And to underscore this point, Angelou’s grandson, Colin Johnson, includes a note reflecting on how his grandmother lived her life as a model of real courage.

Written in verse, Rise! takes the reader on a journey of Angelou’s life. It is a bumpy journey (which is why this book skews toward the older child and picture book enthusiast), however skillfully presented quite poetically and lyrically.

Packed with emotion, the story begins with Maya and her brother Bailey traveling alone as small children as they are shipped off to Stamps, Arkansas, to live with Momma Henderson and Uncle Willie. There they find safety but are also exposed to white prejudice. When they are reunited with Mother Vivian a few years later, Maya is abused by her mother’s boyfriend, whom she names. He is killed, and Maya becomes mute, fearing her words and voice killed him.

Returning to Momma Henderson, Maya discovers books and the spoken word— and slowly rediscovers her voice. The South is also a potentially dangerous place for black people at that time. So off they go, Bailey and Maya, back to Mother Vivian—but this time in San Francisco . . . and beyond, as Maya becomes an adult out in the world. And as Hegedus reveals, that is when Angelou really finds herself: “Maya discovers a voice that is gravelly and gritty, as jubilant and joyous on the page as it is on the stage.” “Maya’s love of language now moves within her, rhythm, rhyme, meter as music.”

A master at tackling difficult subjects that intersect with Angelou’s life (child sexual abuse, lynching, assassinations), Hegedus also points out that as Angelou matures, she “vows not to go mute. There is no safety in silence.” On the contrary, Angelou becomes a prolific writer and spokeswoman. “She raises her pen and lets her words her words make music. The sentences dive and dance; her life story surges and soars.” Angelou shows herself and the world how a proud African American woman does more than survive . . . she thrives.

Equally poetic are Tonya Engel’s illustrations. With each brush stroke Engel’s paintings, inspired by folk art and Southern tradition, are rich, colorful, and completely moving. They are the perfect complement to Hegedus’ text. The back matter in this book contains a timeline of Angelou’s life, resources for survivors of child sexual abuse, and a selected bibliography.

With Rise! Hegedus has elevated the craft of writing, as well as the bar, for all fellow picture book biographers. A true storyteller’s storyteller, in capturing Angelou’s journey, she challenges writers to produce their best stories while continuing to enrich the life of her readers of all ages. The story ends with Angelou’s death at 86 years old, though Hegedus assures the reader, “As her heart beats its last beat . . . her words her words still rise. They will always rise rise rise.”