The Rise and Reign of the Mammals: A New History, from the Shadow of the Dinosaurs to Us 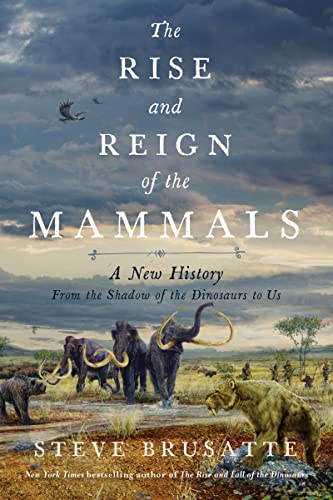 “The Rise and Reign of the Mammals is an important book, full of fascinating mammals and the dramatic history of mammal paleontology.”

Teeth, jaws, ears. These three interrelated anatomical features highlight the differences between mammals and other organisms. While live birth and milk-secreting glands may seem at first blush the useful adaptations possessed by mammals, the evolutionary story is far more complex. The Rise and Reign of the Mammals: A New History from the Shadow of the Dinosaurs to Us by Steve Brusatte provides a superlative natural history for those interested in what came after the extinction of the dinosaurs.

Brusatte, who teaches paleontology at the University of Edinburgh, begins the story of the mammalian evolution not in a post-Cretaceous world devoid of dinosaurs but millions of years before. Beginning in the coal forests of the Carboniferous period, some 359 million years ago, he begins with the pivotal split between mammalian and reptilian ancestry. With a dash of creative speculation, he tells the story about two groups of base organisms. One goes one direction, the other goes in another direction. One group becomes synapsids, the earliest organisms that will, after millions and millions of years, evolve into modern mammals. The other group, diapsids, will become modern reptiles. Rise and Reign is peppered with these imaginative scenes, recreating past events, combining narrative impact with the latest scientific research.

In a later scene, the ancient megafauna of North America struggle to survive after the eruption of a megavolcano in “what is now Idaho.” Brusatte describes the dystopian scene where “About a thousand miles downward, in what is now Nebraska, a half foot of nasty, sulfur-smelling, glassy stuff blanketed the ground like snow. . . . Others, including many mammals that lived on the ground, endured days or even weeks of hunger, thirst, disease, and exhaustion, before succumbing. Then, in one final insult, they were buried in the very ash that clogged their lungs, polluted their water, and poisoned their food.” Yet this mass death became a boon for paleontologists, since the volcanic ash preserved the remains of the mammals in much the same way Vesuvius preserved the bodies of those living in Pompeii.

Rise and Reign is an accessible and entertaining exploration of mammalian evolution. It weaves together natural history, the history of paleontology, and Brusatte’s own biography. It traces mammalian history as far back as the ancient synapsids. In natural history, as in contemporary culture, naming is everything. This reviewer grew up classifying animals like Dimetrodon and other pelycosaurs as “mammal-like reptiles.” Brusatte substitutes the more accurate, albeit jarring, classification “stem mammals.” It takes a little getting used to, since Dimetrodon looks nothing like a mammal, even though it is mammalian. The specific mammalian feature is its teeth, which are different sizes. After millions of years, the three bones of the synapsid jaw will evolve into the tiny bones of the inner ear.

Beyond the naming, Brusatte also profiles Emma Dunne, one of his PhD students. Her specialty is data. He explains how “Emma’s generation thinks like a stock market analyst or investment banker: collect tons of data, use statistical models to take into account uncertainty, and explicitly test hypotheses against each other using numbers rather than intuition.” Data crunching becomes interrelated with the other revolutionary innovation of the past decades, DNA sequencing. Using genetic material, entire family trees have been upended or radically changed. Gone are the “wastebasket taxons” of Insectovora and in its place several new taxons united only in their morphological similarities due to convergent evolution.

Over the last few decades new mammalian fossils have been found in Pakistan and China. Brusatte spends a chapter focusing on the evolution of bats and whales. Distantly related to pigs and other ungulates, whales first took to the water because of food availability. The Tethys Sea, located between the Indian Subcontinent and Asia, became a proving ground for cetacean ancestors. Whales once had legs, but due to evolution, abandoned their terrestrial features. It was a long, slow, gradual process. The first whales appeared otter-like and then developed into more seal-like species. Then, after millions of years, they abandoned rear legs altogether, lost the sense of smell, and, in the case of dolphins, developed peg-like teeth. It should also be said that evolution shouldn’t be thought of as a progressive process.

Evolution depends on the combination of genetic mutation and environmental circumstances. A woolly mammoth possesses the physical features—long fur, small ears, large size—ideally adapted to thriving in a cold climate. When the ice caps melted and another mammal (us) came on the scene, it stood little chance for survival. Humanity, due to high population, technological innovation, and confirmation bias, believes in our superiority, intelligence, and invincibility as a species. The recent Coronavirus epidemic took that hubris down a peg or two, but the self-destructive behavior continues.

Brusatte leaves humanity with a mixed blessing. Climate change has staved off the worst effects of the Ice Age, since the present day is still considered an Ice Age, with an unsettling observation. The Earth’s temperature is currently rising with the same impetus as the Permian. Back to Dimetrodon and the pelycosaurs. The Permian extinction killed 90% of life on Earth. The Rise and Reign of the Mammals is an important book, full of fascinating mammals and the dramatic history of mammal paleontology. It also comes with a warning. Mass extinctions are a regular occurrence. If things aren’t changed, it may happen again, sooner rather than later. Mammal species are dying at a prodigious rate. The future is unwritten, and humanity might not be around to write it.