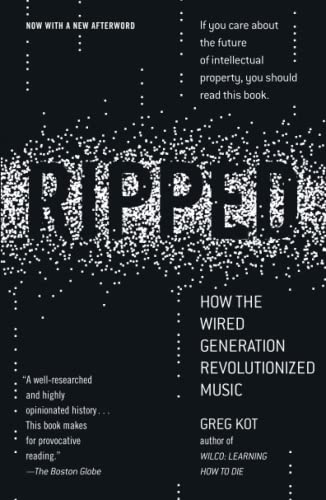 The music industry is broken.  The labels know it.  The artists know it.  Consumers definitely know it.  Greg Kot knows it, and he seems kind of happy about it.  In his book, Ripped: How the Wired Generation Revolutionized Music, Kot catalogues how different musicians found ways to go over, under, around, and through the majors in order to find a new path to fans and profitability in the Wild Wild West chaos of the digital frontier.

Most of the stories Kot included were familiar—Radiohead’s Name-Your-Own-Price for In Rainbows; Trent Reznor’s download giveaways; and Prince’s ever-controversial antics of giving away hard copies of his albums, both with concert tickets and with weekly publications.  But the author also introduced, at least to this reviewer, a few new artists, such as Girl Talk, who are making some high-quality music—even if it is a mash-up of other unlicensed samples.  Night Ripper is one of the smartest albums to come out in a long time.

A little bit of irony: At several points throughout the book, Kot mentions how quickly artists can connect with fans.  For example: they can finish a mix at 7:00 and have it online at 7:01.  As fast as the music industry changes, that is one of the best advantages to come out of the digital era.   Kot’s book, however, is an old-school, hard-copy, hold-in-your-hand read.  This doesn’t mean the information he includes is bad, it is just a little dated.  With the time it takes to publish, it can’t be right on top of events.  That is what the author’s blog is for.

Kot interviewed Jack Rabid, editor of the online industry blog The Big Takeover, for his thoughts on new business models.  Here is Jack’s take on the whole situation:

“[The album is not dying.] What’s dying is the idea of only the crappiest crap, made with the crappiest intentions, with the crappiest production, to entice the most airtime on the crappiest giant chains of radio stations, bought and paid for by crappy labels and dictated by some crappy, contemptuous, lowest-common-denominator projecting programming executive from his crappy polling printouts in some crappy office somewhere, to ensure we all swallow the same crap all over the country at the same time, and then placing that one slice of crap on a longer disc with a bunch of even crappier crap.  That is the concept that is dying.  Amen.”

Amen, brother. Let’s get back to the business of making great music and let the bottom line take care of itself.

Reviewer Amanda Mark is a classically trained pianist who studied under Jean-Louis Haguenaeur at Indiana University’s renowned School of Music. She heads the publishing division of Rustic Records in Nashville and works with the Nashville Public Library as a co-founder of the Popmatic Podcast and as a reviewer of various books and music media.