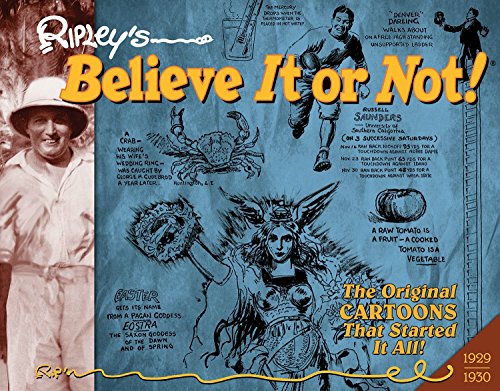 On the grandest scale, Ripley’s Believe It or Not is the unacknowledged father of PBS documentaries, The History Channel, The Guinness Book of World Records and reality television.

The Library of American Comics newest release, Ripley’s Believe it or Not: Daily Cartoons (1929–1930), contains the first two years in the strip’s gloriously long run. This is a timeless collection of facts, fun and art that, over 80 years later is still wildly fascinating.

In one simple, single panel, Robert Ripley’s comic strip beautifully captured the wonders of this vast world. He created a window into it all for everyone to peer through.

Ripley’s Believe It or Not showcased the oddities of nature, magnified the inane, cast a spotlight on the downright weirdness of human behavior and everything around it for all to see.

As a comic strip it could cause the most violent argument as well as unite a family in laughter.

Some found impossible to believe a single stream could flow into both the Pacific and the Atlantic. Others loved reading about Caroline Bierhals of New Kensington, PA who ate one hundred ice cream cones in 1 hr. 45 min. Still others were disgusted with the idea that a man could lift a 105 lb. weight with just his tongue.

But almost everyone knows that if something appeared in Ripley’s Believe It or Not, it absolutely had to be true!

As Ripley often claimed “Truth, you know, is really stranger than fiction.” Open to any page in this collection and you will marvel at this world’s surreal beauty. You will read of instances of insane happenstance, unbelievable coincidence and get a good impression of how special life and nature in all their forms really are.

The variety that Ripley covered in each strip is astounding. One day would contain items about a spider, a Bible verse, a golfer, some math and ghost story. The next would include a composer who conducted his own death march, a man who underwent 268 operations and twins who were inexplicably born in two different countries.

The strip traveled the world and yes, it brought you the unusual. Yet no matter how crazy any item sounded, the reader knew that what they had just read was absolutely one hundred percent true.

Through his travels and the incredible volume of notes that he kept, this wasn’t a boast. It was a fact and people knew it.

That credibility was hard earned and as this volume makes clear, editors were occasionally called upon to justify Ripley’s claims. The veracity of his work was important but it was also a big part of his own self-promotion. Something he excelled at.

In a stroke of brilliance Ripley understood that by seeking out entries from readers he not only gave weight to what he wrote, but by doing so he also gave the strip a local flavor. He offered cash rewards for the best facts and made sure to publish not only the names of the contributors but where they lived as well.

While the content could drift from the stunning to the mundane, one thing held it all together. It is Ripley’s touch with a pencil. When he needed to be he was an excellent portrait artist and he could create a mixture of trees and mountains that truly looked like the profile of George Washington.

There was a classical touch to his most complex drawings that somehow seemed to ground them in the respectability of a museum. Or at the very least, the editorial page. He used shadows expertly and could bring the technical drawing of a violin to life.

On the other hand, with just the simplest of lines he could bring a man eating 102 eggs for breakfast to a full life. He also could draw a really funny bowl-legged chicken. While his pencil line could easily drift across styles, but everything between the borders of the strip is easily identifiable as Ripley.

Few strips have ever arrived in the pages of an American newspaper so fully formed as Ripley’s Believe it or Not. Bruce Canwell’s introduction takes us back to the cartoonist earliest days on the West Coast and also tells the story of how the artist stumbled across the Believe It or Not format while looking to make a deadline.

The introduction also holds a generous amount of the self-taught artist’s early work. From the start you can see Ripley’s love of cross-hatching, shadows and clear, distinct images. He understood what it took to make an image accessible to a newspaper reader and the work he created is often evocative in nature.

The drawings that he made while covering the heavyweight championship fight between Jack Johnson and James Jefferys on July 4, 1910, move from dramatic to humorous in one panel. Fifteen years later this ability to cover multiple levels of an event would be a key part of Ripley’s success.

An aggressive and smart businessman and gifted with a natural flair for promotion as well as his own tremendous drive, it is clear from every panel that he loved what he was doing.  Ripley’s Believe It or Not proved to be so popular that the concept moved easily into radio, books, movie shorts, TV, and Ripley’s own museums.

The strip is so deeply imbedded in American culture that today Baltimore’s Inner Harbor boasts a Ripley’s’ Odditorium as one of its most popular attractions. We want to be thrilled, we want to be challenged and we want to see a bowl-legged rooster.

The idea that Robert Ripley brought to the pages of newspapers across the world will never die. Ripley’s Believe It or Not: Daily Cartoons (1929–1930) is part Barnum, part Cosmos.

It is history, humans, animals, the universe, and science at their finest and most fun.