The Right Sort of Man 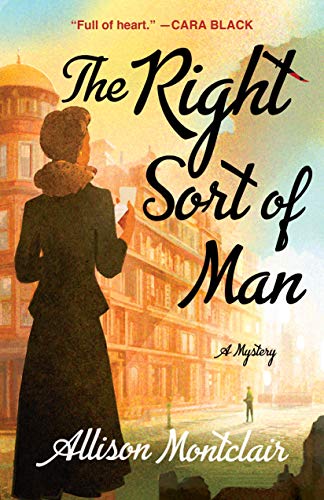 “The interchange between Gwen and Iris is worth the price of admission. It is a laugh out loud escapade that would fit perfectly on British Channel 4.”

British mysteries can be tedious and dry, not unlike British cuisine of the 1940s. Occasionally, one comes along that is demonstrably delightful. Of course, there must be a murder, and that is the trigger for The Right Sort of Man by Allison Montclair. Set in London shortly after World War II, The Right Sort of Man presents two female protagonists who have escaped the awful war with injuries that do not show. Mrs. Gwen Bainbridge’s aristocratic husband Ronald died in the fight, and Miss Iris Sparks was too busy using her abundant physical and mental skills to follow the marriage pastime.

Gwen and Iris decide that what postwar Britain needs most is a match making service that will find the right sort of man and woman for their clients. Their Mayfair office is visited by Tillie LaSalle, a young woman seeking an introduction to someone who will take her away from the dreary life she is living. The proprietors identify Richard Trower as just the right person.

A date is arranged, but Tillie is murdered before it can be consummated. The police find a note—later found to be forged—in Trower’s flat from the deceased Tillie breaking the date. They also find the murder weapon under the mattress. Trower has a motive and the means. It seems like an easy solution to the mystery, and Scotland Yard is convinced that Trower is their man. Miss Sparks and Mrs. Bainbridge are not.

Thus begins an adventure that takes Iris and Gwen on a chase through London’s underworld where Iris’s passable East Ender accent fits right in. They discover that the recently departed Tillie was not an angel. She was a player in the black market that was widespread in London. Along the way, they uncover a scheme to counterfeit illicit, but valuable, rationing coupons, a joint venture of bad cops and good crooks.

Allison Montclair has a flair for dialogue and character development. Iris and Gwen come alive through their conversations, slowly revealing to each other their wartime experiences. Life in postwar London remained quite challenging, but the two captivating, but amateur, investigators overcome life-threatening obstacles in their search for justice.

The interchange between Gwen and Iris is worth the price of admission. It is a laugh out loud escapade that would fit perfectly on British Channel 4. For a first novel, it is a blast.