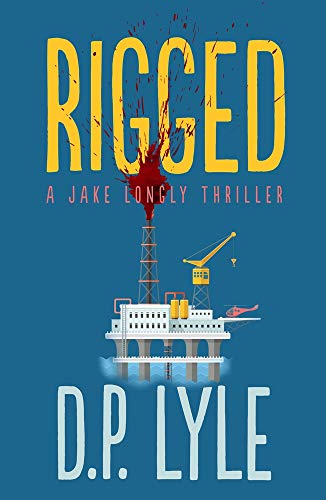 “Perhaps the first three stories in the series provide the reader with a more definitive sense of characters and story, but Rigged fails to make the grade.”

D. P. Lyle’s new novel, Rigged is the fourth in his Jake Longly series. Presumably the protagonist of the story is Jake Longly, but the various points of view used throughout the story make it difficult to recognize who, exactly, the hero is.

Jake is the son of Ray Longly, owner of Longly investigations, a mysterious character poorly defined. Jake owns a restaurant/bar and hates working with his father and despises working at the bar. It begs the question, Why bother?

The story opens with a first-person account of Jake in court, being sued with a frivolous lawsuit that disappears. Has nothing to do with the story. The second chapter takes us to a third person account with Tommy (aka “Pancake”) Jeffers, a detective of the Longly firm. Pancake has journeyed to Fairhope, Alabama, where he is to meet an old girlfriend, Emily Patterson. They were grammar school sweethearts, and she is a no-show.

And so, the story starts, however we are 35 pages into the story before two bodies are found on the edge of a farm. Emily and her boyfriend, Jason Collins, have been executed. Now Pancake has a stake in the investigation, and he plans to see it through to the end.

Longly Investigations join forces with the local authorities, Chief Billie Warren and her team. She accepts their help, knowing that they may be able to twist a few arms that she cannot.

The question of drugs arises, and everyone who knew Emily swears she would have nothing to do with anyone using or dealing with drugs. Emily is in a divorce settlement with her soon-to-be-ex Sean, but it is not contentious. And although Sean is on the persons of interest list, he quickly drops off, since he was working on a rig in the gulf when the murders occurred.

Emily has a second boyfriend, Charlie Martin, who is extremely jealous of her relationship with Jason, but again, everyone who knows him swears he has no stake in the game of murder.

As Ray, Pancake, Jake, and Jake’s girlfriend, Nicole, interview the growing number of suspects, they are unable to wrap their hands around anyone who really fits the bill. They do learn from the sheriff that a plastic bag of meth was found on Jason’s body, and this brings some local drug dealers into the picture.

In addition to these four main characters, Lyle has brought in a journalist whose role has absolutely nothing to do with the story or the other characters; she just appears sporadically and interviews people. She could be totally written out of the story and never be missed.

It should be noted that the premise is a good one with several twists and turns, however, point of view issues are distracting and lead the reader astray. The first person POV leads us to believe that Jake is designed to be the protagonist, but every single first-person scene deals more with him and Nicole having sex in the shower, sex in the bedroom, sex in the hotel, well, sex everywhere—and all the sex has absolutely nothing to do with the story. Lyle has also written Jake’s ex-wife Tammy into the story as a nagging little lady who has nothing better to do than call Jake and whine.

Lyle also reveals the guilty party—or is it parties—long before he should through a third-person scene, with the remainder of the story showing how the main characters unravel the mystery that the reader already knows.

The third-person points of view lead the reader to think that Pancake is the real hero—he’s the hard worker; he’s the one with a stake in the game. But there are more first-person sex scenes than third-person investigation scenes, and the story falls flat.

Perhaps the first three stories in the series provide the reader with a more definitive sense of characters and story, but Rigged fails to make the grade.