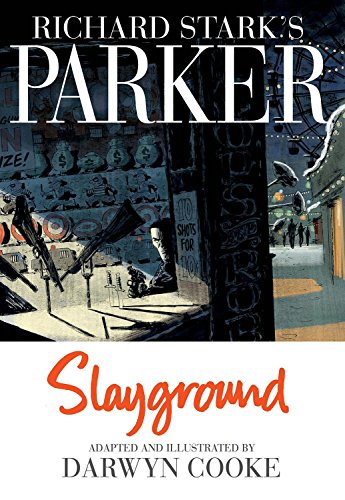 “Cooke’s feel for the character and action matches the best seen in the world of graphic novels.”

An ice floe sits at the center, broken fragments at the front giving way to solid white ice in the distance. Near the front surrounding the ice sit broken wooden docks, their lumber still fixed in cross-patterns but long devoid of any real function.

To the right a large building towers above the surrounding structures that lay in the distance. The city itself sits far away, across a flat horizon. Close examination shows a few buildings rising above the land. None of them are really defined. There is a construction crane, and it looks like maybe a stadium is being built. It’s hard to say. Again it doesn’t matter for the real feeling hanging over the picture is one of isolation.

It is the dead of winter, obviously freezing, and the branch that hangs over the top left corner holds no leaves. It seems that we are looking out across the expanse from a park.

Faded blue colors the horizon and throughout the same color mixes with black and white to somehow create a feeling of stillness. Even quiet. Nothing is going on anywhere.

It is perfect isolation.

In two pages Cooke pulls us in with not only the urban quiet of a city in winter, he also hints at the decay of an American city in the late sixties. He gives us the big picture, and then on the next page narrows everything down to the most important part of any city: the people who are in it at any given moment.

Against a solid white page three images show us a vehicle skidding across the snow and flipping as the narration tells us that a mine has exploded under an armored car. As it rolls, men in ski masks and black uniforms approach the truck and attach bombs to its undercarriage.

This is a well-planned robbery, one which requires stealth, exactitude, speed, and trust in your fellow criminal. One of the men is one of the most famous criminals in modern crime fiction: Richard Stark’s Parker.

In the fifties and sixties novels and cinema sharply redefined the concept of the American hero. The upright, morally straight hero normally found in war stories and Western tales began to shift. What was moral and acceptable behavior from a character acquired an air of uncertainty. One of the greatest characters to come out of this redefinition of the heroic was Richard Stark’s Parker. A criminal by trade, he still held traditional ideals such as loyalty and skill high on his personal chart. But he also robbed banks and when he needed to, killed people without blinking. He lived life in the shadows.

Starting in 1962 Parker eventually appeared in 24 novels as well as making appearances in a few other short stories. Written by Donald Westlake using the pen name Richard Stark, the character caught on with fans who loved crime writing and noir.

While Parker has made several appearances on the screen, most notably in Jean-Luc Godards’ Made in the U.S.A. and as portrayed by Lee Marvin in director John Boorman’s 1967 film Point Blank, no one since Mr. Stark’s original novels has captured Parker as completely as Cooke. He completely grasps the isolation and complexity of Parker’s life.

It is his ability to move the reader through long, wordless sequences that brings so much of what Parker has to deal with to life. When the robbery goes south Parker finds himself trapped in an amusement park. By Cooke’s choice to limit narration we get a real sense of how small Parker has become in such a wide and varied landscape of fun.

As an artist Cooke often uses panels without borders. Empty space serves to emphasize the isolation the image conveys. By limiting the color palette to black, white, and a pale, drained sense of blue, we never leave the feeling of winter and more importantly as the story advances—the cold.

The park is closed of the season and there is only one route out. But Parker can’t use it due to the criminals and eventually police who are waiting for back up. Cooke creates a pamphlet for the park that highlights the eight different “lands” featured in the park.

He allows us to see the same roadmap that Parker will use for his defense. Much of the thrill of the battle that follows is seeing how Parker’s ingenuity pays off when he is chased.

The action becomes nonstop and any pretense of moral correctness on either side disappeared earlier in the story. The chase is about money, and then finally, revenge. In the end it is more about staying alive than anything else.

The book also holds a short story adaptation that was previously only available in a limited edition. 7enth takes Parker to a high-rise construction site as an amateur unwisely decided to kill a friend of his and steal his money.

Cooke’s feel for the character and action matches the best seen in the world of graphic novels. The IDW series of Parker adaptations are great crime literature and great comic action.