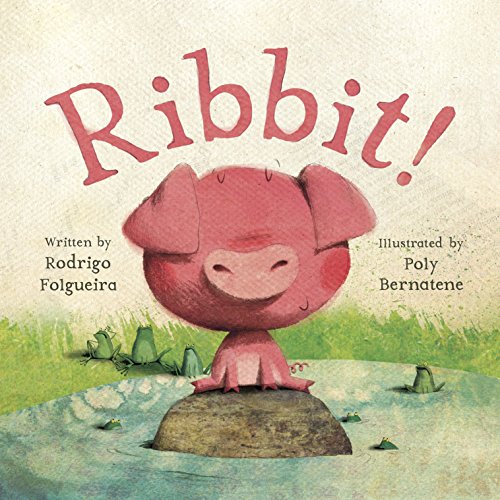 "However ultimately cheerful Ribbit! is, it also sneakily offers up a deeply moving universal message that bears highlighting for both children and adults."

SCENE: So there you are, moseying along, minding your own business, just being a frog in your big old pond, concentrating on whatever frogs concentrate on all day long when . . . AGH! What is that? You run smack into a piglet. In your pond. Sitting on a rock.

FROG, INTERIOR DIALOGUE: Am I hallucintaing? thinks the frog, wondering simultaneously if frogs can hallucinate in the first place. Is there really a bright pink piglet in my pond?

Of course the calamitous news of this perceived fraud spreads quickly. All the animals of the forest hurry to the pond to check out the pink phenom. They begin to argue among themselves, accusing one another about who must be related to whom (did the possibility of a genetic miracle abound in author Folgueira's mind?). Soon, perceived insults and slights lead to shouting at each other and completely ignoring the pink pond interloper "who just sat there, practicing his 'Ribbit!'"

This lighthearted story penned by Argentinian writer Rodrigo Folgueira, is illustrated with personality, simplicity, and subtlety by Poly Bernatene, also an oft-published Argentine. The mere fact that there is no black line in sight was a relief to computer-image addled eyes, and the plain, pale backgrounds with their faint tinge of nearly invisible newsprint hint at the art having been created on handmade paper, adding soft dimensionality without making a gazillion different visual elements compete for the reader's attention.

But you cannot dismiss this delightful picture book as childsplay. However ultimately cheerful Ribbit! is, it also sneakily offers up a deeply moving universal message that bears highlighting for both children and adults.

[SPOILER ALERT:] Turns out the pink piglet is not a rabblerousing intruder so much as a great mimic looking for a friend.

So pay attention. Next time you see someone who looks different but sounds vaguely familiar, pay attention. S/he/it might have something important to share. Besides, there's enough room in the pond for all of us.