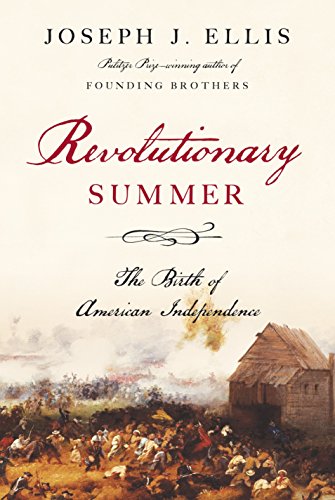 Setting the stage for his fascinating Revolutionary Summer: The Birth of American Independence Joseph Ellis writes, “In truth, no shared sense of American nation had existed in 1776, even though the Continental Congress and the Continental Army can be regarded as embryonic versions of such. All alliances among the Colonies, and then the States, were presumed to be provisional and temporary arrangements. Allegiances within the far-flung American population remained local, or at most regional, in scope.”

Tellingly, Mr. Ellis observes, “To presume otherwise is to impose a level of political coherence on a much messier reality and to underestimate the limit that American leaders and the congress and the Army were truly facing. They were attempting to orchestrate a collective response to multiple political and military challenges on behalf of an American population yet to become the American people.”

Too little appreciated in the history of the American Revolution is the momentous implication of the need to engage in cohesive strategic action in pursuit of the military agenda at a time there was no tradition of doing so.

One of the illuminating takeaway messages of this powerful book is that the American independence movement prevailed only by adopting military insurgent tactics that have frustrated this country’s wartime efforts over the last half century in three very different places—the jungles of Vietnam, the deserts of Iraq, and the mountains of Afghanistan.

Notably, the American side prevailed by adopting tactics that challenged conventional thinking. This entrepreneurial initiative that led to prevailing in the military realm was the precursor to the ingenious that led to global economic dominance in the 20th century.

Intriguingly, British General Frank Howe perceived the Revolutionaries’ winning guerilla strategy even before it was recognized by the American leadership, predicting, “knowing their advantages and having the whole country, as it were, at their disposal, they will not readily be brought into a situation where the King’s troops can meet them on equal terms.”

The winning strategy, which at the time appeared to be a concession, but, truth told, was the path to ultimate victory, is described by Joseph Ellis: “The rebel army was likely to withdraw inland, away from the coasts, where the British Navy gave its army such a tactical and logistical advantage.” To this end, General Howe, “seriously doubted that the Americans would be so foolish as to fight a conventional battle against a numerically and professionally superior British force. And the last place they would choose to do so was New York, which he fully expected they would abandoned and probably be burned to the ground.”

Much of the focus of Revolutionary Summer centers on New York. That New York exerts disproportionate influence over the country’s agenda and priorities in contemporary society is arguably traceable to the events of the summer of 1776.

The thinking in 2008 in which Main Street was sacrificed for Wall Street is but the most recent chapter in the history of a place where reason was readily sublimated to other emotional agendas.

In Revolutionary times, New York was simultaneously strategically important but strategically indefensible for the very reason that New York played directly into the hands of the British naval superiority.

Lacking a grand plan to guide the overarching conduct of the military initiative, “Washington was implicitly acknowledging that British strategy would dictate American strategy. In practice, this meant that wherever” the British “chose to attack, Washington felt obliged to defend” which strategic impossibility of sentiment and geography is eloquently chronicled by the author, for “what was militarily essential was politically impossible.”

Contrary to the Patriots’ earlier success in Boston, a place of the most fervent, ardent, and energized patriotism, the sentimental antithesis applied in New York, for “the governor of the Colony, the Mayor of New York City, and the majority of the wealthiest residents were all loyal to the Crown and thereby lent considerable credibility to the British claim that any invasion and occupation of New York was less a hostile act than a much-welcome liberation.”

And, “while the water-laced geography made it strategically indefensible, probably the worst spot on the Atlantic Coast for the Americans to make a stand, the political architecture of the city and surrounding countryside made it the most hostile environment in all of the American Colonies to defend, because so many of the residents did not wish to be defended.”

Joseph Ellis makes the case that General Washington and his troop’s sense of superiority—American patriots perceived “themselves as invincible . . . because they were patriotic, liberty-loving men willing to risk their lives for their convictions”—was more misinformed bravado than the real truth.

The American idea of “patriots fighting for the noble goal of independence . . . misconstrued the motivation of ordinary soldiers on the British side, who shared a deep-felt affection for their respective regiments, and for the men standing to the right and left of them in battle. British soldiers saw and felt themselves as a brotherhood prepared to share some of the most excruciating experiences of life together. The regiment was their family, and they were prepared to defend its honor whatever the costs.”

In contrast to other studies, especially, David McCullough’s 1776, which was concerned with the military challenges of the time, Revolutionary Summer probes the strategic intersection of the military and politics, logistics and leadership, common nation building and interests and parochial self-interests.

As a case in point, General Washington recognized the “natural difference” between voting for Battalions and Raising of Men. As a consequence, he was destined to “command an army of unqualified officers, wholly undependable militia, and short-term enlisted troops,” described “as bad a one as ever appeared in any part of the Globe.”

Revolutionary Summer is a vividly engaging study of strategy. The telling of the story of the “birth of American independence” gives voice to the observation that few entrepreneurial adventures of consequence would ever been undertaken had those pursuing them truly appreciated the hardship, risk and adversity that must be overcome to achieve success.