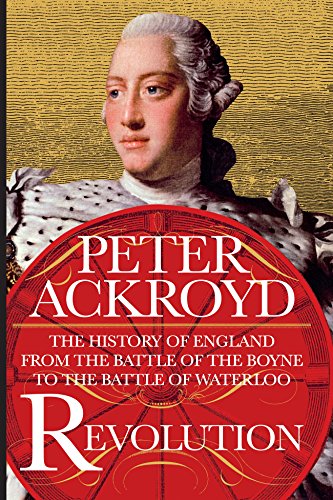 “describes the sweeping changes to England’s economy, government, culture, and influence in Europe . . .”

The history of England in the 18th and early 19th centuries is a remarkable time of growth and change. As the island emerged from a period of political and religious strife, including a Civil War, it unevenly grew into a commercial and military powerhouse that spanned the globe.

In the fourth volume of his history of England, Peter Ackroyd chronicles this eventful period from roughly 1689–1815, covering a wide variety of topics with flair and a style that conveys both great events and the people caught up in them.

These topics include not only the expected dissertations on the monarchical and political intrigues of the day, but the rise of the arts and sciences along with the first glimpses of the Industrial Revolution. The rise of the House of Hanover is at the center of this period of course, and the influence of the three King George’s on not only the monarchy and Parliament, but foreign policy is interwoven throughout the book.

As expected, politics and foreign policy occupy most of the book, as this era spans the rise of English power in Europe via numerous wars and the beginning of a global empire. The narrative does not go into any depth in describing the numerous wars fought in this period, although the author notes England was at war with France for nearly 50 years during this era, from the War of the Spanish Succession to the Napoleonic Wars. Even the American Revolution is given short shrift, with the author describing England as better off in the long run without being burdened by the ungrateful colonials.

From a big picture perspective, the more significant development was that England was able to sustain these wars for so long without economic or political collapse, giving them a significant strategic advantage over their rivals. The author attributes three main factors to England’s rise: First, England’s agricultural output grew significantly during this period, allowing greater self-sufficiency and a sharp increase in population. Second, the development of robust and thriving commerce, which helped create a rising middle class that created both wealth and taxes. Finally, the Bank of England, the first central bank in European history, that gave England and its monarchy greater financial stability than most of Europe, while helping to finance the numerous wars of this era with less disruption to England’s growing economy.

However, not everyone benefitted from the significant societal and economic changes that transformed this era. For most Britons, the era was still marked by poverty, crime, and disease. The narrative really takes the reader into the seamy underside of London in particular, and the reader can almost see and smell the dreary streets and hovels that were the neighborhoods of ordinary people.

The author does not mince words in describing the sex, drugs, and rock ’n’ roll of the era. The licentiousness of the era was as notable as the use of the new distilled spirit gin as the drug of choice, with children as young as eight or nine becoming intoxicated daily on the widely available spirit. The rock ’n’ roll of the era was the rise of the theater, novels, and the first satire periodicals, using sarcasm and wit to lampoon politicians, the nobility, and even on occasion the monarchy, asserting the rights of an increasingly free press.

The author does a particularly good job of tying the rise of a particular playwright, author, painter, or even composer to the events of their day, interweaving how politics and events influenced the arts. The genesis of art as a protest medium can definitely been seen in this era, as outspoken critics of the monarchy or politicians use their medium as a safe and even accepted means of protest.

The book is remarkable for its breadth of topics in only 375 pages or so. Of course, that means no particular topic is examined in any real depth, but for a survey history it is more than adequate and has an extensive bibliography cataloged by topic for readers seeking further detail on a particular subject. In a breezy narrative, the author describes the sweeping changes to England’s economy, government, culture, and influence in Europe as it transformed from a mid-level island power to the world’s dominant naval and economic empire.