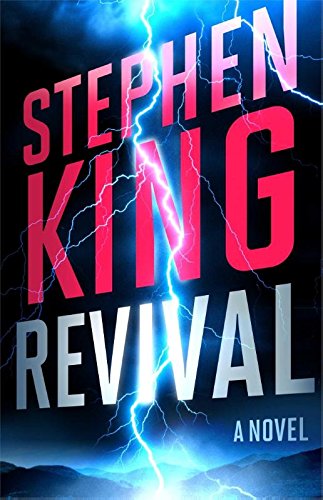 “Revival is written at the pace of a slow burn.”

Stephen King, one of the most influential authors of modern time, returns to his roots of paranormal horror with the bone-chilling Revival.

King cites Mary Shelley’s Frankenstein and the Arthur Machen short story “The Great God Pan” as inspiring this novel. They explore two themes: life and afterlife: a scientist, scarred by personal tragedy madly tries to smash the boundary between life and death with terrible consequences to follow, also fearing that the afterlife is filled with inescapable horrors that can influence the real world.

The fatalistic writing of H. P. Lovecraft is infused in King’s novel as well, as his characters repeatedly quote: “That is not dead which can eternal lie,/And with strange aeons, even death may die.”

This haunting couplet could be spun into many meanings, none of them pretty. King’s interpretation is soul crushing. Some doors are best kept locked, but characters in horror stories are just can’t help themselves.

Revival follows Jamie Morton from his boyhood in rural Maine (a familiar setting for King readers), through his young adult years as a drug-addicted guitarist in cover bands, to his mature years running a recording studio. Every time his life takes a dramatic turn, Charles Jacobs is there. Morton calls Jacobs his “fifth business,” a change agent that shows up out of the blue after many years and shakes up his life.

Jacobs starts as a positive influence when he meets six-year-old Morton in 1962 as the new preacher in town who’s kind to the child. King foreshadows their relationship, with the young preacher’s shadow looming over the child—a shadow he could never escape.

Jacobs is equal parts charismatic and enigmatic. He charms the small community and has Morton and his siblings play in his home with his wife and little boy. Jacobs conducts mysterious experiments with electricity that fascinate the boy. When Jamie’s older brother Conrad goes mute after an accident, Jacobs cures him with a makeshift electrical device. The preacher says it was a trick; that Conrad was playing mute after his injury healed because he was nervous. Morton buys it, for the time being.

Tragedy sets Jacobs on his maniacal course. The preacher’s wife and boy die in an automobile accident. Then he delivers the “Horrible Sermon” to his congregation. In most cases it would be easy to forgive a person for giving an offensive speech so soon after losing loved ones. How could a congregation fire a preacher only weeks after he lost his wife and son? Jacobs crosses the boundaries so far, basically calling religion a hoax and a waste of time, that the community has little choice.

“Religion is the theological equivalent of a quick-buck insurance scam, where you pay in your premiums year after year, and then, when you need the benefits you paid so—pardon the pun—so religiously for, you discover the company that took your money does not, in fact, exist.”

Morton and Jacobs reconnect decades later, with the preacher having reinvented himself as a traveling carnival act taking photos with lightening. He takes the heroin addicted Morton into his lab and cures him with a bolt of the strange blue lightening. However, every cure has its price. Morton owes Jacobs double—for himself and his brother Conrad. The cure comes with side effects, such as wandering around naked at night and having bad dreams. Morton later realizes he’s the lucky one compared to Jacobs’ other “patients.”

Decades later, they meet again. Jacobs is a big-time preacher who runs tent-show healings that attract thousands. His electrical powers really do heal the sick, but a select few of them quickly turn for the worst, going mental or becoming violent. Morton tries to confront him, but that shadow still looms over him. He knows Jacobs is working toward a bigger goal, a door to the world beyond that should never be unlocked. Morton must choose between stopping him or reluctantly cooperating so he can get a glimpse at what’s on the other side.

Revival is written at the pace of a slow burn. This isn’t a thriller where the character is constantly in danger and monsters might lurk around every corner. It builds to a crowning scene; and yes, there’s a lightning strike and a version of “It’s alive!” In that scene King unleashes the darkest corner of his imagination—and it’s jarring.

King wrote a worthy tribute to his icons of horror.

Brian Bandell is the author of the science fiction thriller Mute and a thriller, Famous After Death. He is also a journalist at the South Florida Business Journal, where he has won more than 20 awards for his writing.