The Revenge of Power: How Autocrats Are Reinventing Politics for the 21st Century 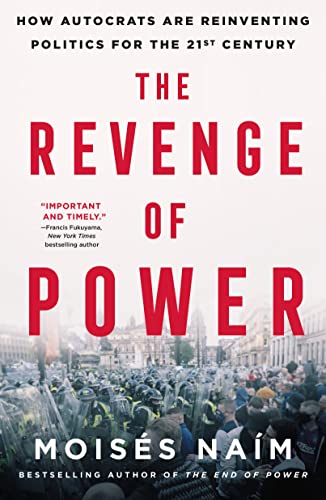 The author is a scholar at the Carnegie Endowment for International Peace and the former editor of Foreign Policy. He also served as Venezuela’s trade minister and executive director of the World Bank. With this background, he is well prepared to analyze his topic: how the three P’s are shaping politics and economics around the globe.

The three P’s are populism, polarization, and post-truths. Skillfully deployed by power-hungry politicians, they can scramble the defenses societies have developed to protect democracies from encroachment by unaccountable power, The three P’s provide a recipe for wielding power that is fundamentally undemocratic, unconstrained by constitutional principles or other institutions.

The 3P framework us a system for obtaining and maintaining power in a world that says that only people-power, aka democracy, is legitimate. The 3P system fakes fealty to the liberal consensus, while eating away at it from the inside.

Naím proceeds to document his thesis with case studies from around the world—how autocrats nullified term limits in Russia, Bolivia, Venezuela, Burundi, Egypt, and other African countries. In China, Xi Jinping is even now arranging for himself a third term as head of the Communist Party.

Post-truth politics is waged on social media and by morphing media companies from independent agencies to governmental mouthpieces.

The book’s survey of global trends is enlightening and disturbing, but it risks oversimplification.

Donald Trump was banned from Twitter because his polarizing post-truths fomented violence. So he founded his own platform, curiously named Truth Social. In its first year, however, it proved a financial flop, raking in less than $4 million. It is doubtful his cranky posts there will help him become a real autocrat.

Have the 3P systems of Xi Jinping and Vladimir Putin succeeded in convincing Chinese and Russians that their leaders are legitimate? You can fool some of the people some of the time but not everyone forever. It is not propaganda but police crackdowns and long jail terms that keep most Chinese and Russians in line. Fed up with post-truths and fearful of having to serve in an unjust and unnecessary war, thousands of Russians are moving in all azimuths to desert their homeland. The refugees may outnumber those successfully conscripted.

Still, fake news travels much faster than real new in social media, partly because it is more interesting. From the standpoint of Russia’s Internet Research Agency, “online active measures” are quite cost effective. If one bot in a hundred influences attitudes or behavior favorable to Kremlin goals, mission achieved and ready for more. Fake news disseminated by private parties is often picked up by major spreaders of disinformation such as Breitbart from which it may graduate to a major outlet such as Fox News. Once there, mainstream media may feel compelled to mention if not refute the item.

World affairs continue to be shaped by many forces and factors, but elements of 3P synergy will be strong among them. Naím’s book is important for anyone seeking to get to the basics of reality and finding it interesting to do so.