Revenge in a Cold River: A William Monk Novel 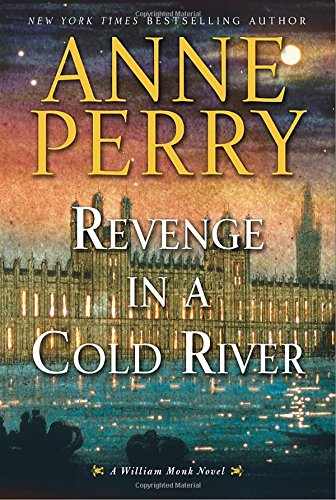 The 22nd title in Anne Perry’s fascinating and addictive William Monk series is an example of how a talented author can maintain a character’s freshness in a long running series. Monk never becomes stale as is so often the case in many series.

Commander of the Thames River Police William Monk is called to the scene of a drowning by the hated McNab, Head of Customs. “McNab hated him. Monk did not know why, but he knew very well why he hated McNab. McNab was behind the failure of the gunrunning arrest that had ended in open battle on the deck of the smugglers’ ship and Orme’s death.”

Monk knows that the death of his long-time friend and fellow officer is McNab’s fault, but he can’t prove it. Nor is he any closer to learning why McNab hates him. Since the carriage accident years before that wiped out his memory, Monk can only deduce his own history through police records and the reactions of those who knew him before.

Monk does know why McNab called him to the crime scene. The drowned man is also shot in the back. Why would anyone shoot a man who is already dead? Did McNab do it so the case will be investigated by Monk and the Thames River Police? Again the question is why. Why does McNab so anxious for Monk to be involved?

The victim is identified as a master forger named Blount who had escaped while in the custody of customs during questions. McNab had claimed not to know the victim and had not mentioned an escaped prisoner. Monk’s new right-hand man is skeptical. “I wouldn’t believe McNab if he told me what day it was today, never mind yesterday,” he tells Monk.

Monk’s investigation has barely begun when another prisoner escapes from customs during questioned. This time it is a man named Owen, an explosives man. Is he partners with the now dead Blount in some plan? If so, what is the plan and does Owen intend to carry it out himself with the aid of some unknown criminals?

While Monk is busy investigating, a certain Lady Beata York, wife of respected judge, Sir Ingram York, visits her husband in a hospital for the insane. Ingram York curses his wife, not an uncommon practice for him, and dies. As he was a nasty, cruel husband who enjoyed performing sadistic sexual acts, Beata is relieved rather than grieved. “. . . she wanted to laugh, long, crazily, on and on. Ingram was dead! She was free!”

At Ingram’s funeral Beata meets two old friends from San Francisco, Aaron and Miriam Clive. The three had been close during the Gold Rush days. Aaron had made a fortune in the gold fields, wed Miriam after the murder of her first husband, Piers Astley, in a bar fight, and has built a business empire.

Beata does not confide in Miriam either about Ingram’s perverse cruelty or about how relieved she is to be a widow. She certainly does not mention her affection for Sir Oliver Rathbone, a barrister whom her late but not lamented husband had attempted to destroy. Only the efforts of William Monk had saved Oliver’s reputation.

The two threads of the story begin to entwine when Beata overhears McNab telling Miriam that he believes Monk is guilty of murdering Piers Astley.

The irony is that Monk has no memory of ever being in San Francisco during the gold rush or any other time, but knowing that before his accident he was not an admirable person in many respects, he fears he might have murdered Astley.

What disturbs Monk most is that McNab knows about his past, and furthermore, is aware that Monk has lost his memory. Monk knows McNab is manipulating him, but he cannot determine what the Customs man intends.

When Monk accidentally kills one of McNab’s customs officers while trying to rescue him from the Thames, he learns the extent of McNab’s thirst for revenge.

Revenge in a Cold River has a convoluted plot revolving around the psychological strain of personal secrets rooted in the past that grow into an obsessive desire to avenge oneself whatever the cost. While Monk may experience a bit too much angst over his lost memory, the dire circumstances in which he finds himself justify his fears.

Anne Perry offers another strong historical mystery that is true in both culture and manners to its Victorian setting.