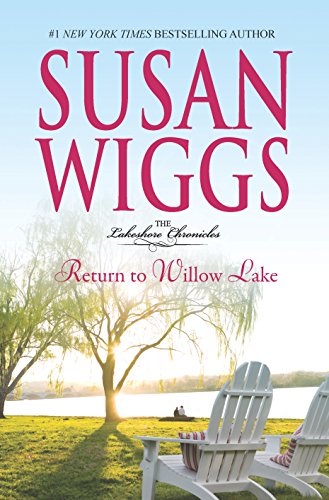 “. . . a story of self-discovery, of friendship lost and reclaimed, . . . both compelling and real.”

Return to Willow Lake is the ninth in The Lakeshore Chronicles series by bestselling author Susan Wiggs.

Set in the Catskills town of Avalon, the novel centers on the character of Sonnet Romano, whose mother, Nina’s, story was told in Dockside. Several of the characters starring in previous novels in the series make an appearance here, so fans will be delighted to revisit old friends and familiar places.

Sonnet is the illegitimate daughter of Nina Romano and New York senatorial candidate General Laurence Jeffries, and she struggles with all the baggage that comes with such a legacy. While Nina provided a warm, loving home, Laurence ignored his daughter until she began to pile up accomplishments.

Sonnet continues to try to live up to her father’s expectations in order to earn his approval, a challenging task. She even becomes engaged to her father’s campaign manager Orlando Rivera, a man as driven and appearance-conscious as Laurence. In a telling metaphor, when Orlando does her the honor of giving her the key to his apartment, Sonnet—who is supremely organized—loses it.

Orlando is the man she thinks she ought to love, while the man she desires is Zach Alger, a photographer and local Avalon boy. Zach was her best friend in high school, but they went their separate ways afterward, keeping in touch only by phone and text message. Sonnet sees him as someone who wastes his talents due to a lack of ambition, and as such, he has no place in her upwardly mobile life.

At her stepsister Daisy’s wedding, she unexpectedly encounters him, finding he has grown into an intriguing man. After too much champagne, she succumbs to the attraction and to his sexual expertise in the cockpit of a Chris Craft on the lake, an encounter she regrets almost immediately. It changes their friendship to the point where she feels she can no longer share her triumphs and troubles with him.

The heart of Return to Willow Lake, though, lies in the complex relationship among Sonnet, her mother, and her father. Sonnet is torn between the demands of the profound love she feels for her mother and the precarious love she tries to win from her father.

She has channeled her considerable energies and talents into advancing in the career direction the politically motivated Laurence approves of, even as she has moved farther away from a job that satisfies her on a deeper level. As a rising star at UNESCO she helps children as a group, but she no longer has the personal contact with individual children she find so satisfying.

Sonnet finally feels she has her father’s full attention and approval when she wins an important fellowship that will take her abroad. At the same time, she learns that her mother is pregnant with complications that place her life at risk. (Sonnet was born when Nina was a teenager, so her mother is still a relatively young woman.)

Laurence is appalled when Sonnet turns down the fellowship to return to Avalon to care for her mother. Once again, she has to struggle to reconcile the opposing claims of her two very different parents.

In Avalon, Sonnet is forced to face her complicated feelings for Zach because they both accept positions working for a reality television show filming there.

One of the most entertaining and vibrant secondary characters in the book is the show’s star Jezebel, a hip-hop performer forced to do community service with underprivileged children at a camp in Avalon. Jezebel takes no nonsense from anyone, setting a useful example for Sonnet.

Since Sonnet is of mixed race, the African American Jezebel also brings those issues to the fore. Ms. Wiggs handles Sonnet’s efforts to accept the two sides of her heritage with tender emotional depth.

As the simple life of Avalon collides with the high-powered world of national politics, Sonnet must reexamine her priorities and makes some significant changes in her life.

Return to Willow Lake is a story of self-discovery, of friendship lost and reclaimed, and of the obligations and stresses of family. Ms. Wiggs writes with grace and a true understanding of the difficulties everyone faces in dealing with those issues. Sonnet’s journey is one the reader will find both compelling and real.