The Return of the Pharaoh: From the Reminiscences of John H. Watson, M.D. 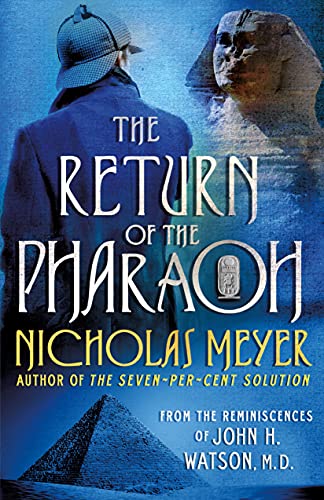 “This latest in the Great Detective’s further adventures is no disappointment. Filled with hair-breadth escapes, historical and archaeological commentary on the era, and quite a few pithy comments from Watson himself, it’s a unique adventure for the reader.”

It's the year 1910. Dr. John Watson is in Cairo, where second wife Juliet is being treated for tuberculosis at the al Wadi sanitarium in the Jardin des Plantes, an island in the middle of the Nile. Owned by the army, it’s reserved for veterans and their dependents, for which Juliet, as the wife of an ex-battlefield surgeon, easily qualifies.

Though Watson is allowed visits at specified times, he’s otherwise left to his own devices and is free to roam the city, where he discovers another Englishman who says he was also a member of Watson’s regiment.

“‘Have we met?’ I hazarded, with a queasy sensation that we had.

“What really surprised me was his regimental tie and pin, proclaiming him an officer of the Northumberland Fusiliers. No, that is not precise. What truly caught my attention was the large gravy stain on that tie.

“‘Holmes, why are you in Egypt, wearing my regimental tie?”

The last Watson had heard, Holmes was thinking of retiring to Sussex, but here he is—in Egypt, in Cairo, in disguise, no less.

Before he knows it, Watson agrees to meet Holmes secretly.

“‘I expect you’re wondering what I’m doing here, my dear fellow,” my companion broke in on my thoughts.

“‘You will recall that is the very question I put to you last night,’ I responded. In truth I was annoyed to find Holmes in Cairo and more annoyed to find myself agreeing to meet him.”

Michael, 11th Duke of Uxbridge has disappeared and the Duchess has hired Holmes to find him.

“The duke is fond of wintering in Egypt, but presently no one seems able—or willing—to locate him.”

Duke Michael also had an interest in Egyptology, specifically the contents of the pharaohs’ tombs. “Tomb robbing,” Holmes calls it. His opinion is that the duke simply decided to go on a gold-hunting expedition of his own and hasn’t bothered to tell anyone, particularly his wife, since he had a “female companion” with him.

When Watson is invited to join the investigation, he laments that “like Scheherazade, he would beguile me,” and agrees eagerly, being careful not to tell Juliet his plans. He knows what she would say.

“‘Sherlock Holmes is in Egypt?’

“‘On a case, dearest. I encountered him by merest chance.’

“‘And now he wishes you to help him?’

Checking the hotel where the duke always stays, they discover the room to which his mail is an address that doesn’t exist. Moreover, his companion has passports for four sovereign nations.

Is the lady a spy? Why? And for whom?

Soon, facts and clues come hard and fast. In recent months, several amateur archaeologists have died, their demises appearing accidental but pointing to something more sinister. A man offering information is stabbed with an ancient Egyptian dagger, dying as he scratches the letters “VR61” in the dirt, resulting in Holmes and Watson spending a night in an Egyptian jail.

Cleared of any fault in the man’s death, they discover Uxbridge had come into possession of a map that may lead to an unopened tomb in the Valley of the Kings where so many of the pharaoh’s tombs are being excavated.

A meeting with Howard Carter, former Chief Inspector of Egyptian Antiquities, who is on his way to join a dig with Lord Carnarvon leads both men to the Valley of the Kings. With the Duchess in tow, Holmes, Watson, and Carter will learn the answer to the duke’s disappearance, as well as the mystery of “VR61”—if death by a sandstorm or a collapsing tomb doesn’t do them in first.

The game is once more afoot—only this time not on British soil.

As Holmes quotes to Watson: Nothing not written in blood is worth reading.

No less exciting than A. Conan Doyle’s stories, though with a drastic change of scenery, Nicholas Meyer’s “editing” of Dr. Watson’s notes once again brings to life another Sherlock Holmes adventure.

With footnotes pointing out discrepancies or explanations of facts in Watson’s journal, this latest in the Great Detective’s further adventures is no disappointment. Filled with hair-breadth escapes, historical and archaeological commentary on the era, and quite a few pithy comments from Watson himself, it’s a unique adventure for the reader.