Return of the Barbarians: Confronting Non-State Actors from Ancient Rome to the Present 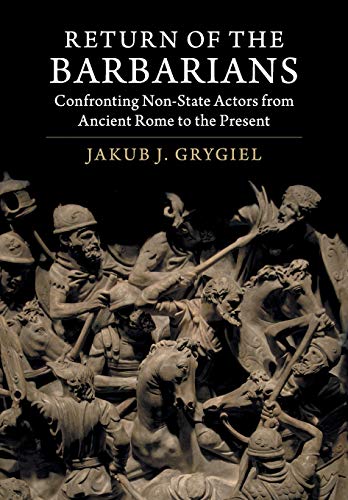 “offers a sobering historical analysis of these groups . . .”

Non-state actors, a term loosely applied to organizations such as Al Qaeda and the Islamic State in Iraq and Syria (ISIS), represent a daunting strategic challenge to the United States and our allies. While they typically do not occupy territory or control a traditional nation-state, these groups exercise an outsized influence in the Middle East and other regions and pose an enduring  military and foreign policy threat to the region’s stability.

While groups such as these seem to be products  of circumstances in the 21st century, this new book by Professor Grygiel demonstrates these groups have, in fact, been around throughout history, when they were more often referred to as barbarians.

This book is dense and extensively footnoted, but the basic structure used to analyze these “barbarians,” a description the author find pejorative and not very useful, begins with some basic questions: What constitutes a “non-state” or nomadic actor? How do they draw their power and maintain their cohesiveness? Why have they endured throughout the centuries? And most importantly, what can be done by traditional nation-states that suffer from their depredations?

While he acknowledges the limits of using linear historical analogies, he does offer real insights on lessons that can drawn from how the Romans, Byzantines, and even settlers on the American plains dealt with roving bands of marauders.

Unfortunately, there are no easy answers to be offered. The factors that create and maintain these groups are remarkably consistent across history: the proliferation of weapons, the lack of effective state control over vast swaths of territory, and the desire of a charismatic strong leader to create a band of followers loyal to him who are interested not in territorial conquest, but plunder, glory, or ideology.

Moreover, just as in ancient time these groups are often small, highly mobile, and largely decentralized, making it difficult even for a highly trained and equipped military to use conventional military power to suppress or destroy these groups.

The author goes into great depth examining how the traditional tools of nation-state relations—diplomacy, deterrence, and the use of force are often ineffective against these groups. Because traditional methods are ineffective, states most often resort to lighter, more mobile military units, bribery of nomadic leaders, or a measure of decentralization of power to allow local citizens to arm themselves for self-defense.

In addition to these methods, if faced with a continual low-level threat from these groups versus focusing on a larger conventional threat as the Romans did with the Parthians, a state may eventually accept a certain amount of violence on the farthest frontiers in order to guard against a greater perceived conventional threat.

Sadly, the author paints a fairly bleak picture of the historical record of large nations dealing with non-state actors, barbarians, or nomadic raiding tribes. The most examined case, the late Roman Empire, showed a decaying political structure unable to provide security and stability to the far reaches of the Empire.  This lack of concern, or the perception of it, created an uncontrolled decentralization of power, with local nobles or garrisons taking over the traditional roles of the state in providing security and governance, becoming both self-sufficient and increasingly independent of Rome’s imperial rule. The author extends this hypothesis further to make a compelling case that the effective abandonment of most of the Western Roman Empire to increasingly capable nomadic bands was at least as much a cause for the final dissolution of the Roman Empire as the traditional explanations of centuries of societal decay and political infighting.

Interestingly, the author did not go into depth discussing the successful taming of the Plains Indian threat 1400 years after the fall of the Roman Empire. Although he does discuss the failure of the early Spanish and American settlers to stop raids by the Comanches and other nomadic tribes, he does not discuss how the Great Plains were eventually closed and settled via railroads and other 19th century technologies that ended the “ungoverned spaces” roamed by the tribes. Combined with the virtual annihilation of the buffalo herds the tribes relied on for sustenance, there was a very different ending to this security problem than the Visigoths and the Ostrogoths that eventually conquered Rome.

As a lesson for modern nations confronting these groups, this book offers many issues and concerns but no universal solution. Each non-state actor is fundamentally different and must be confronted and contained via every means of national power. The author offers a sobering historical analysis of these groups that should be read by military and policy leaders.