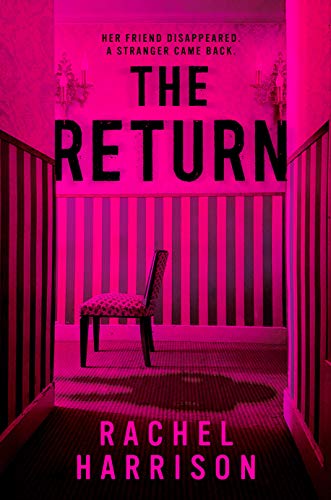 “a story of an obsessive friendship that is strong enough to survive death—and what happens in its aftermath.”

Molly, Mae, Julie, and Elise were friends, and had been through childhood and college. After graduation, they drifted apart, as friends will. Molly moves to California. Mae lives in New York. Elise is in Buffalo. Julie was the wild one, backpacking to Europe, running out of money in Amsterdam, coming home to marry someone her friends had never heard of.

Now, they are told she’s missing.

“She left her house last Friday to go hiking and never came back. Tristan filed a missing person report. They have a team out looking for her.”

Elise doesn’t believe it. Of the three, she and Julie were closest. They were college roommates and best friends. She’s confident Julie will reappear.

“I knew two truths about Julie. She was the most stubborn, most determined person I’d ever met. And she loved attention. Julie would never go missing. She might go dark, intentionally disappear for a few days to make sure someone noticed. But she wasn’t missing.”

Nevertheless, Julie can’t be found. After a year, Tristan holds a memorial service. For closure. Though Elise still maintains Julie is alive.

Two years to the day she disappeared, Julie walks out of the forest. She has no memory of where she’s been for that time and because of that, everyone walks on eggshells around her.

In an effort to get back to normalcy, Mae arranged a “girls’ getaway” at the Red Honey Inn in the Catskills. “A sprawling storybook estate. Aggressively whimsical. Cloying. A pastel Frankenstein’s monster.”

Each room is themed. Somehow, Julie and Elise are assigned each other’s rooms. Julie’s is an Edgar Allan Poe monstrosity. Elise gets a Baroque turquoise nightmare.

The room is too cold. The thermostat doesn’t work. Elise continually thinks she sees a dark figure out of the corner of her eye but when she turns, there’s nothing there. There’s a sound of something moving in the walls, a liquid dripping.

“In the mirror, I see it. A dark creature towering behind me, its long arms slowly lifting, its spiderlike hands coiling around my shoulders. A moment later, there no one in the mirror but me and behind me only ordinary shadows. I’m at the point where I can’t trust my own senses.”

Though the three try to revive the camaraderie they had with each other before Julie disappeared, it’s forced and blatantly unsuccessful. This is most obvious when Julie, a strict vegetarian, orders a steak at dinner, then proceeds to devour it and any remnants of the others’ meals as well.

Julie has definitely changed. She no longer looks like the healthy young woman who walked into the forest. She’s rail-thin, hollow-eyed, sallow-skinned, and now has a habit of spitting out molars as nonchalantly as she would chewed-up gum.

Mae and Molly find themselves not wanting to get close to her.

When a concerned Elise calls Julie’s husband, he confesses she’s been sleeping outside on the lawn and eating raw meat. He’s afraid to be alone with her.

Armed with this information, the three women decided to confront Julie about her “lost” memories but before they can, Mae becomes ill with influenza, food poisoning, or something worse.

“It hit me like a baseball bat. The crepe. Mae had two tiny bites of Julie’s crepe. Not to mention Julie kissed her. Tristan said he got sick, too. Just like Mae. What if Julie carries some kind of sickness?”

In the Inn itself, staff members are disappearing. Guests are leaving.

Julie is getting hungrier and hungrier.

Elise’s best friend may have gone into the forest, but something else came out.

The fear that our loved ones may not be whom they seem is a theme used often in literature and movies. View any version of The Invasion of the Body Snatchers as the perfect example. Loss of identity, of self, is one of humans’ elemental anxieties, along with an equal aversion to dark and of isolation.

Author Harrison has combined these three fears into a story that will evoke pity even as the reader experiences the trio’s horror and revulsion.

Though the climax of the book is indeed terrifying, it only encompasses 40 of a 296-page novel. There’s a great deal of flashback, some of which isn’t directly linked to Julie’s disappearance but is more a character study of Elise and explaining her behavior. The chapters are extremely long, an average of 30 pages each. The switching of tenses from past to present may also cause the reader some confused in the narrative.

The Return is a story of an obsessive friendship that is strong enough to survive death—and what happens in its aftermath.