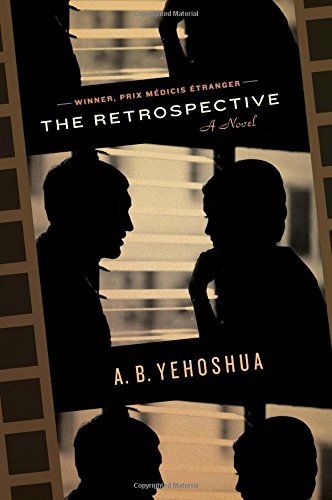 A. B. Yehoshua’s partly autobiographical new novel The Retrospective, whose Hebrew title Hesed Sephardi means Spanish (or Sephardic) Charity (or Kindness or Compassion), lends itself to both a literal and to multiple allegorical readings.

On the surface its narrative describes Yair Moses, an Israeli film director who, accompanied by Ruth, an actress—who is frequently his leading lady and occasionally his lover and has recently received worrying but inconclusive results from a blood test she refuses to repeat—attends a retrospective of his early films in Santiago de Compostela, a small city in western Spain.

In his hotel room Moses sees a reproduction of a painting that reminds him of one of his films whose discarded ending lead to both a separation from his first screenwriter Shaul Trigano and to Ruth and Trigano’s romantic separation. At the retrospective he views those early films dubbed into Spanish and receives a prize.

Upon his return to Israel Moses revisits the locations where each of those early films was shot and attempts a reconciliation with Trigano in the hope Trigano will convince Ruth to repeat the blood test—and perhaps will work with Moses again on a new film.

But why Trigano, who discarded Ruth over an artistic disagreement nearly half a century ago, would have any more success convincing her not to ignore her health makes little sense.

The art reproduction that triggers Moses’ memory is “Roman Charity,” an oft-depicted scene from ancient Rome where Cimon, a prisoner condemned to death by starvation, is visited in prison by his daughter who keeps him alive by breastfeeding him.

In the movie that ended Moses and Trigano’s partnership Ruth played a young woman who had just given up her baby for adoption. In Trigano’s screenplay the movie ends with Ruth’s character breastfeeding an elderly beggar. Ruth balked at performing the scene, Moses backed his actress and had her walk into the sea instead, and Trigano broke up with them both.

Allegorically this novel tries to resolve several pairs of opposites: the highly imaginative Kafkaesque writing in Mr. Yehoshua’s first book of short stories published half a century ago versus the realism of his novels; the purity of an artistic concept versus the compromise that is the completed work; Israel’s highly educated Ashkenazi upper middle class versus its lower middle class Sephardim; and the descendants of the Catholics who expelled Spain’s Jews versus the Israeli descendants of those expelled Jews.

The early films described in some detail and shown at the retrospective, represent Mr. Yehoshua’s early stories. Moses is Mr. Yehoshua’s mature alter ego, while Trigano represents a younger more creatively daemonic and narcissistic version of the immature writer he once was.

After the breakup Moses goes on to become a commercially successful director, while Trigano, who believes Moses has sold out, never works in film again.

The two characters and the disagreement that resulted in their breakup represent the conflict between an idealistic purity of artistic vision versus the practicalities necessary to get a work of art completed.

There is also an ethnic dimension at play. Mr. Yehoshua is Sephardic, and Moses is but the most recent of his Ashkenzi alter egos. By choosing Ashkenazi alter egos Mr. Yehoshua seems to imply that when Sephardim like him and his fourth generation Jerusalemite father become highly educated and enamored of Western literature, visual art, and classical music they assimilate into Ashkenazi culture.

By contrast, one of Moses’ newly wealthy Sephardic patrons has never heard of Kafka. Mr. Yehoshua’s mother, like his character Ruth, was a Moroccan immigrant.

And while Trigano, Ruth, and the deceased cinematographer Toledano are all Sephardic, only Trigano is stereotypically quick to take offense and reluctant to reconcile.

The scene depicted in “Roman Charity” can be seen as representing both the mature writer receiving creative nourishment from his younger self, and Ashkenazi Israelis receiving cultural vitality from their Sephardi countrymen (and on a global scale western civilization being reinvigorated by traditional Third World cultures).

Thanks in part to Stuart Schoffman’s fine translation Mr. Yehoshua conveys all this symbolism and allegory in a quick and easy read, but The Retrospective has an implausible ending and lacks the fully developed supporting characters and the texture their interwoven subplots achieved in his earlier novels such as The Liberated Bride.

Its length notwithstanding, The Retrospective is reminiscent of the short, later novels of his slightly older American contemporary Philip Roth that focus on a single character’s situation and inner life. Readers who enjoyed Roth’s Everyman might also enjoy The Retrospective.