Rethinking Suicide: Why Prevention Fails, and How We Can Do Better 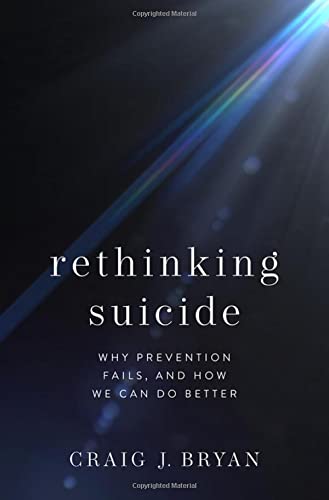 “a well-written, well-argued book about how we can make a real difference in preventing suicide by challenging the assumptions we have about why people kill themselves and addressing ourselves to the social processes that create fertile ground for suicidal ideation to develop.”

If you have an interest in learning about suicide prevention among military personnel and veterans, read this book right away.

In Rethinking Suicide: Why Prevention Fails and How We Can Do Better, author Craig J. Bryan makes a compelling case, arguing that the way we think about suicide locks us into taking actions that don’t decrease the number of people who die by suicide. He also illustrates important ideas about what can be done differently to reduce the suicide rate and save lives.

A military psychologist who served in Iraq, Bryan attended to many service members who attempted suicide. Some lived. Some did not. In his work, Bryan realized that suicide is both a “wicked” or exceedingly complex problem that defies straightforward solutions, and that a great deal of the work done to prevent suicide is colored by confirmation bias, making efforts to save lives largely ineffective.

Confirmation bias occurs when one uses data, research, or other information to substantiate what they already believe. In the case of suicide, one predominating view is that people have suicidal thoughts because of mental illness. Bryan finds not only is this not necessarily true, but that the belief inhibits us from understanding the true complexity behind suicidal ideation and finding creative and workable responses to and support for people with suicidal compulsions or thoughts.

One difficulty of addressing suicide is that it is a wicked problem. Complex issues are viewed from multiple perspectives by stakeholders. Because of the multiplicity of perspectives, many faulty assumptions about the problem are formed, giving rise to failed and misguided solutions.

Bryan thus argues that a solution-based approach to suicide should be replaced by process-based approaches “focused on creating and building lives worth living.” We do this by embracing complexity, moving beyond the assumption that suicide is caused exclusively (or nearly so) by mental illness, being willing to address issues or ideas that are uncomfortable, and looking at quality of life issues.

The book is a relatively slim volume, but it covers important ground.

Bryan looks at different types of therapies and the impact they have on suicidal behavior. While each of these therapies can improve outcomes (save lives), each has important and significant areas that are not addressed. Bryan writes, “Unfortunately, we don’t know which ‘active ingredients’ of suicide-focused treatments enable them to reduce the probability of suicidal behaviors better than status quo treatments.”

Are there other areas on which treatment, solutions, or processes should focus?

Bryan addresses two important ideas: reducing the lethality of suicide attempts and improving quality of life, so that people don’t feel the need to end their lives.

The second issue, and perhaps the most critical from a mental health perspective, is improving quality of life so that people do not feel compelled to kill themselves. Studies show that when minimum wages are increased or greater access to affordable healthcare provided, suicide rates decrease. In other words, when people have access to the basics of life—adequate food, water, shelter, clothing, and medical care— relationships and outlook improve and suicidal ideation decreases.

This is a critical point in Bryan’s argument. Quality of life issues are not in and of themselves mental health issues. Poor quality of life might lead to depression or anxiety —or suicidal ideation. However, to address these social issues is to lay the groundwork for a happier, more connected society that provides opportunities for growth and contentment.

Rethinking Suicide: Why Prevention Fails, and How We Can Do Better is a well-written, well-argued book about how we can make a real difference in preventing suicide by challenging the assumptions we have about why people kill themselves and addressing ourselves to the social processes that create fertile ground for suicidal ideation to develop.