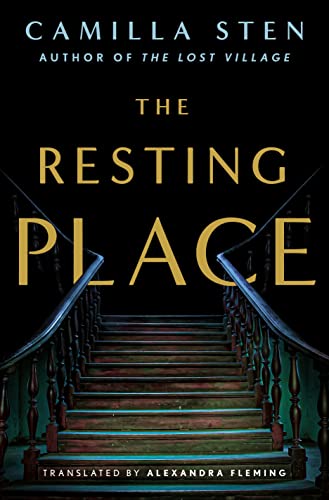 “It's a masterful and unexpected bit of literary legerdemain illustrating fully why Camilla Sten’s novels of psychological suspense have become internationally acclaimed.”

A few moments after her grandmother Vivianne is murdered, Eleanor comes face to face with the killer, but she can’t identify the person she sees. Eleanor has face blindness—prosopagnosia, the inability to discern human faces.

Currently, Eleanor is on her way to Solhöga—where her grandfather Evert killed himself—a country estate she didn’t know existed until her grandmother’s will left it to her. Going with her are her boyfriend Sebastian, and her aunt Veronika, and Rickard, from the family’s law firm.

Solhöga is vast and isolated. The caretaken is absent. Settling in, Veronika tells Eleanor some of the house’s history, how it was their summer home, where parties were given and friends came often.

Then, something terrible happened. Vivianne became ill; Evert stopped inviting guests to their home, shunning his relatives; there was a tragedy.

The house evokes disturbing memories for Veronika. When Eleanor and Sebastian explore Solhöga, they discover her unconscious on the grounds.

“She’s so cold I think she’s dead. She lies pale and still under my unfeeling fingertips. I put my hand to her chest and feel it moving up and down: the most beautiful movement.”

Rickard the lawyer has been missing for hours when Eleanor receives a text from him.

My battery dies and the screen flickers and goes black.”

At the caretaker’s cottage, they discover Rickard wounded and the caretaker dead, an apparent suicide. He leaves a cryptic note:

“‘I kept watch for them for half a century. I promised to keep the secret, but it’s over now.’”

They carry Rickard back to the manor where he confesses he isn’t a lawyer but a private investigator hired by Grandfather Evert’s sister to prevent Eleanor from selling Solhöga.

“‘The mansion that had been in her family’s possession for generations passed to her brother’s widow after his murder. They want to make sure the estate returns to the family.’

‘My grandfather wasn’t murdered. He died of a heart attack.’

Rickard shakes his head. ‘She said he died of an overdose. Pills and alcohol.’”

With Veronika still partially dazed from the attack and Rickard in need of medical care, Sebastian and Eleanor attempt to leave, but the driveway is blocked by an unknown automobile. As a winter storm sweeps in, they return to the manor.

A diary left by a servant gives Eleanor insight into the many secrets her grandmother kept from everyone. She learns Vivianne came to Sweden, changing her name and reinventing herself. Marrying Evert, she brings her cousin Anushka from Poland to live with them, but keeps their relationship secret, making the younger woman into a servant.

When Vivianne loses her baby and goes into post-partum depression, Evert reveals to Anushka he’s aware of her deception.

“‘If my wife needs to believe that I believe she’s the daughter of a wealthy Swede who grew up in France, I’ll let her believe it. If my wife wants to maintain that our maid is just some poor kid who turned up on our doorstep, I’ll let it be true so long as that’s what she needs.’”

Husband and cousin are drawn together by sympathy and circumstance. It’s inevitable they fall in love. Then, the cook brings her little daughter to the manor, and Vivianne sees the child . . .

When Eleanor finds a photograph of Anushka, the cook and her daughter, the true reason for Vivianne’s death, as well as her cruel treatment of Eleanor, is finally revealed. The fifth person somewhere on the estate, the killer, appears, forcing the ultimate confrontation. Eleanor will be shocked to realize she knows the killer very well, and has, for years.

The “trapped by a killer and being picked off one by one” convention isn’t new, and may be a cinematic and literary cliché, but Camilla Sten seizes the trope and gives it a mighty twist by having Eleanor unable to recognize the killer though they come face to face.

Not being satisfied with that bit of literary contortion, the author then gives the narrative another convolution by offering the reader three points of view: that of Eleanor in the present; and her grandmother; and Anushka, the cousin-turned-servant, in the past. Through these three voices, the reader is allowed the entire story and the full disclosure of how the tragedy ending in Vivianne’s death comes about.

Setting the novel during a blizzard that effectively cuts the characters off from civilization is truly the icing on this literary cake.

Atmospheric and chilling, The Resting Place is a masterful and unexpected bit of literary legerdemain fully illustrating why Camilla Sten’s novels of psychological suspense have become internationally acclaimed.